Bayelsa Government on Friday kicked off a 13-day aggressive measles immunization for children between the ages of 9 months and five years across the state. 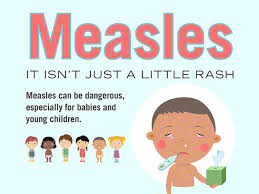 The government said the campaign is part of efforts at preventing children from untimely death and other serious lifelong complications associated with the viral disease.

made this known at a press conference held at the Ministry of Information and Orientation in Yenagoa.

Etebu said the measles immunization will take place from March 1-13, 2018 at every hospital, school, market, church, mosque and Motor Park across the state.

The commissioner emphasized that the measles immunization has no relationship with the Monkey Pox and called on caregivers and mothers to ensure that every child is presented for the vaccine.

Etebu said the vaccine was necessary regardless of previous vaccination statues.

The Health Commissioner who disclosed that the campaign against measles is being co-sponsored by the Federal Government, partners and donors, said the vaccine is free, safe and beneficial to the health and welfare of children.

Obuebite said the lifting of the ban became necessary in order to allow the school children access to lifesaving immunization.

The commissioner said it is an offence for any teacher to prevent health workers from immunising children in any school.

He noted that government investment in health would only be meaningful when children are healthy enough to attend school and learn.

Obuebite said that he would accompany the health workers to some schools during the exercise in order to demonstrate the importance government attached to the wellbeing of every child in the state.

Iworiso-Markson said the government had paid its counterpart funding for the measles immunization outreach in 600 schools across the state.

He called on public office holders, House of Assembly members, community and traditional leaders to encourage caregivers and parents to understand the importance of the measles immunization.

The Information Commissioner also said the government would sensitise the public through the media in native languages to mobilize support for the vaccination.

He urged the media to give the immunization campaign the widest publicity possible to ensure that every caregiver is aware and encouraged to present their children for the vaccination.

Meanwhile, Social Officers of the Ministry of Women Affairs have been directed to return to the field and educate parents, especially women, on the need to present their children for the state-wide measles vaccination exercise.

The Commissioner for Women Affairs, Mrs. Martha Jenakumo, who gave the directive, said Gov. Seriake Dickson was committed to the success of the exercise.

She therefore urged mothers to present their children for the measles vaccination.

The World Health Organization (WHO) Nigeria Immunization Team Leader, Dr. Fiona Braka commended the state government for its commitment to the immunization programme and its prompt payment of it counterpart funding.

Braka explained that the measles immunization was to enhance community protection against diseases, and called on all stakeholders to play a role in ensuring that every child in the state is vaccinated. (NAN)