A general physician, Dr Mercy Luka, has warned that measles can cause infection of the lung, commonly popularly known as pneumonia. 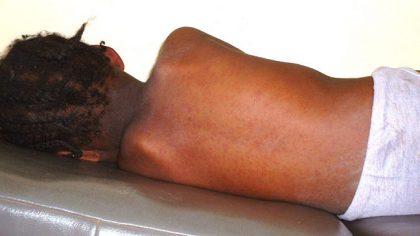 Luka told the News Agency of Nigeria (NAN) in Abuja on Wednesday that measles or pneumonia was the most common cause of death in young children.

She said that unvaccinated children and those with low immunity or malnutrition tend to have measles or pneumonia at the early stages of the disease.

She said that it often delayed the healing of the disease with increased coughs, shortness of breath and high fever.
According to her, measles is an airborne virus that is highly contagious but can be prevented with a safe and effective vaccine.

The physician said that the disease could be contagious from four days and four days after the rash appears.
“When an infected person coughs, breathes, sneezes he transmit the disease in tiny droplets.

“But it primarily affect those who are not vaccinated with MMR (Measles Mumps Rubella) vaccine,’’ she said.
She added that unvaccinated person who shares a house with a measles patient could hardly escape infection.
She said that the measles usually come with fever and develops a very high body temperature.
Luka said that usually at the late stage of the infection, once the rash had already developed the fever subsides. (NAN)