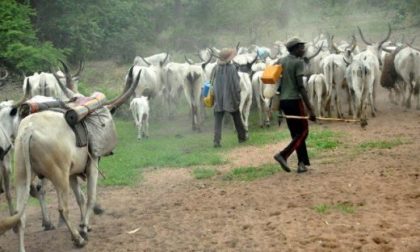 The Magistrate, Mr Emmanuel Azembe, found the convicts guilty after they confessed committing the offence.
Azembe had ordered that the ingredients of the offence under Section 97 of the Penal Code and Section 19(2) of the Open Grazing Prohibition and Ranches Establishment Law 2017, be read and explained to each of the accused persons before their conviction.
The accused persons pleaded their guilt and were consequently convicted and sentenced by the court.
Earlier, the Police Prosecutor, Sgt. Ato Godwin, told the court that the accused persons were arrested by a Joint Task Force led by ASC Terna Raphael of the Nigeria Security and Civil Defence Corps, Makurdi, on March 7.

He said the task force received a phone call from the district head of Kwenev, Guma Local Government Area of the state that herdsmen were openly grazing with their cows on peoples’ cassava farms.
“The accused persons were then arrested by the Joint Task Force,’’ he said.
Godwin said the offence contravened Section 157 of the Criminal Penal Code.

Counsel to the convicts, Mr Tijani Ahmed, pleaded with the court to consider the ages of the accused persons and to tamper justice with mercy, saying “ they don’t know the implication of their action’’.
The magistrate sentenced each of the accused to three months in prison, considering their ages and being first time offenders coupled with the plea of their counsel.
He however gave them an option to each pay fine for criminal conspiracy.
“For the offence of Open Grazing Prohibition and Ranches Establishment Law 2017, they are sentenced to 24 months in federal medium prison or each to pay a fine of N30,000.
“The sentences are to run concurrently,’’ Azembe ruled. (NAN)