The Benin Zonal Command of the National Agency for the Prohibition of Trafficking in Persons (NAPTIP) says it has rescued 468 victims of human trafficking in the last six months. 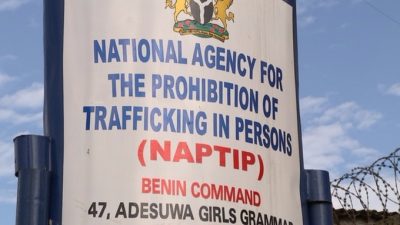 Mr Nduka Nwanwenne, NAPTIP’s Zonal Commander in the zone that comprises Edo and Delta, disclosed this in an interview with the News Agency of Nigeria (NAN) on Tuesday in Benin.

Nwanwenne also said that about 30 suspected human traffickers were arrested within the period.

He said that the command had secured two convictions within the period, while 33 cases were still pending in various courts across the zone.

He attributed the successes to sustained efforts at prevention, prosecution, protection and partnership with various stakeholders.

The commander, however, noted that some of the challenges faced in the fight included unwillingness of some victims to testify in court in pending cases.

He also said that pressure of parents on their wards to go and make money abroad as well as ignorance that life was always better in Europe was another challenge.