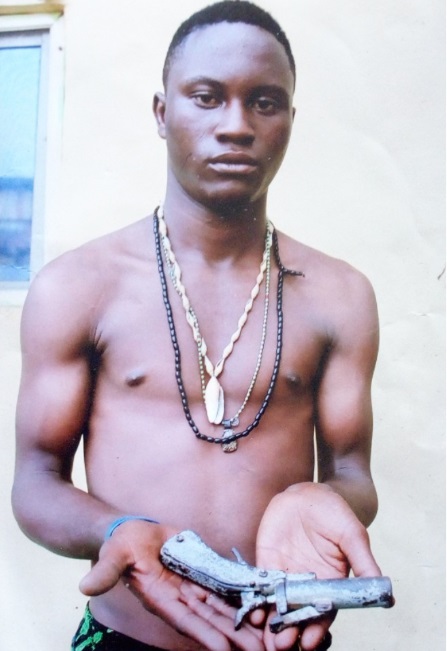 The 20-year-old cult
Operatives of the Federal Special Anti Robbery Squad, FSARS have arrested a 20-year old suspected cult member, with a locally made cut to size pistol at Oworoshoki–Gbagada open field area of Lagos.
A police source alleged that nemesis caught up with the suspect on September 29, when the Deputy Commissioner of Police, DCP in-charge at FSARS Lagos Mr. Ibichim Kaoje received a tip-off from concerned residents of Oworoshoki that suspected cult members had assembled in their large number at the Gbagada Open Field preparatory to unleashing mayhem on them.
The source disclosed that following the report, Kaoje dispatched a crack team led by DSP Olusola Agbola to the scene  to arrest the suspects.
On sighting the police, all the suspects took to their heels and the Police, the source said, pursued them and arrested Lawal with a gun.
During interrogation, Lawal, a resident of Car Wash area of Oworoshoki, allegedly confessed to the crime.
He said he dropped out from Junior Secondary School, JSS 2 to join the Eiye Confraternity Cult group and that he bought the gun found on him from a co-member called Lekan, who is now at large.
Lawal was charged before the Igbosere Magistrate Court, Lagos on a three count charge of unlawful possession of firearm and being a member of an unlawful society called Eiye Confraternity.
Police Counsel, Abraham Fadipe said that the offences were punishable under Section 411, 41 and 330(b) of the Criminal Law of Lagos State 2016.
The accused, however, pleaded not guilty to the alleged crime and magistrate M. O. Ope Agbe granted him bail in the sum of N1million with two sureties in like sum.
Ope Agbe adjourned the case till November 13  for mention.
He then ordered the defendant be remanded in prison custody till he perfected the bail conditions.
The Magistrate also directed the Police to send the case file to the Department of Public Prosecution office for advice on the matter.