The Minister of Niger Delta Affairs, Sen. Godswill Akpabio, says he does not have knowledge of any contract allegedly awarded to the Chairman, House of Representatives Committees on Niger Delta Development Commission (NDDC), Rep. Olubumi Tunji-Ojo. 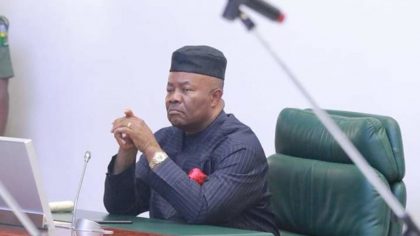 At the investigative hearing on the alleged N40 billion irregular expenditure in the NDDC, Akpabio said that he was yet to see contract documents made to Tunji-Ojo’s company.

“I am not sure if NDDC awarded contract to the Chairman, House of Representatives Committee, Rep. Olubumi Tunji-Ojo.

“For me to say that, I need to see that contracts were awarded to his company; may be the contract was awarded in the area where he comes from in Ondo,” he said.

The News Agency of Nigeria (NAN) reports that Tunji-Ojo was accused of executing contracts by the Interim Management Committee of the NDDC.

NAN also reports that as a result of the allegation, Tunji-Ojo stepped aside as chairman of the committee to allow for a free and fair hearing and not to be a judge in his own case.

The acting Managing Director of the NDDC, Prof. Kemebradikumo Pondei, had accused Tunji-Ojo of corrupt practices in the commission.

On the rift with the former acting Managing Director of NDDC, Ms Joy Nunieh, Akpabio alleged that she was sacked for insubordination.

He explained that the NDDC draws its funds from two sources, the Federal Government and the oil companies.

Akpabio recommended that the budgeting system for NDDC be changed so that it will reflect budget lines in the Appropriate Act.

He also recommended some amendment to the NDDC Act to prevent the management from spending beyond its threshold by splitting big projects into small components.

Akpabio said that management of the NDDC had spent N4.2 billion, which is beyond its threshold by splitting projects into small components of N49 million to evade the approval of the supervising minister.

The minister said that no member of staff of the NDDC had been sacked under his watch, saying that even those on leave got COVID-19 allowance.

Contrary to allegations claiming that the IMC had spent N81.5 billion between February to May, Akpabio said only N23 billion had been spent.

The minister said that only three contracts had been approved since he was appointed as minister of the ministry.

According to him, the contracts include the procurement of forensic auditors, purchase of official cars for NDDC and the award of emergency project on the control of COVID-19.

He told the lawmakers that all contracts were approved by the Federal Executive Council (FEC); except of the emergency COVID-19 project.

Akpabio said that at the time of his appointment, there was no budget running and could not have compelled the then IMC to pay N10 billion for Christmas largess to all state.

He said, prior to the implementation of the of the TSA account, the NDDC had over 300 accounts across commercial banks saying that with such systems, monies could get missing. (NAN)