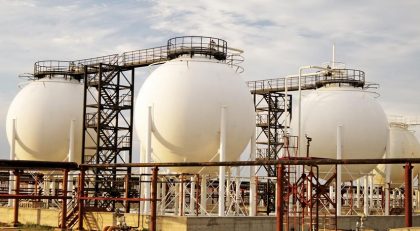 The Standards Organisation of Nigeria (SON) on Tuesday destroyed substandard LPG cylinders, aluminium and galvanised roofing sheets worth over N450 million.
Its Director, Inspectorate and Compliance Directorate, Obiora Manafa, said at the destruction of the products in Lagos, that the affected commodities were classified as life-endangering and unfit for consumption.
Manafa said that in spite of the efforts to curb the menace, the goods still found their ways into the country through unverified means.
He reaffirmed the agency’s commitment to leaving no stone unturned in its fight against substandard goods across the country.
“We are here to destroy some substandard goods seized from some unscrupulous importers and marketers.
“Among the goods to be destroyed are cylinders, aluminium roofing sheets and galvanised steel roofing sheets.
“The goods are the ones that failed to meet up with the critical parameters, and we cannot allow them to get into the circulation, because they are life-threatening,” he said.
Manafa noted that the destroyed products were from different sources; some of which were evacuated from warehouses and others intercepted on the highways.
He said the standards for roofing sheets were very clear, adding that the standards for aluminium profile roofing sheets specified a minimum thickness of 0.4mm.
“Some of these roofing sheets were between 0.2mm and 0.3mm, which are low guage quality.
“These are the kind of roofing sheets people use for a short time and they are destroyed; at the end of the day, consumers do not get value for their money.
“We are not happy destroying these goods because it is a loss, not only to the importer, but to the nation.
“One thing about destroying these kind of products is that they are products you burn; but for the gas cylinders, we cannot burn them, but see how we can recycle them to generate revenue for the nation,” he said.
Manafa said that some of the products to be destroyed were imported from China and Turkey, and were without SONCAP certificates.
He noted that the SON’s Act had helped in reducing the incidence of fake and substandard goods in Nigeria.
“Since we got the backings of the law, it has reduced the preponderance of fake and substandard goods in the country.
“Apart from jailing these dealers of fake and substandard goods, we also do advocacy programmes where we go to the markets to create awareness with trade associations, to tell them the right thing to do.
“Since we started this aggressive advocacy, many of these importers have been complying, especially those who know fake brands,” he said.
Also at the event, the Group Head, LPG, SON, Mrs Nwaoma Olujie, said that the destruction was in response to the series of avoidable gas explosions in the nation.
Olujie said that the impact of gas explosions was unquantifiable, as lives and property were usually destroyed.
“In SON, we classified LPG cylinders as life-endangering products and in recent times, you can take a cue from a gas explosion in Kaduna in January this year and there have also been series of gas explosions in Lagos.
“We have seen the impact of these gas explosions where lives and property have been destroyed.
“This is why we are taking a lot of safety precautions to ensure that cylinders imported into the country meet the minimum requirements of the standard.
“We have standards for LPG, which is NIS 69 and for all the valves and regulators, NIS 220.
“The valves, which would be fitted into these cylinders, must comply with NIS 220, as well as the regulators,” she said.
Olujie pointed out that the importers of substandard products indulged in this nefarious act, to short-change the Nigerian consumers.
“Importation of cylinders is not an all-comers business, but an aspect where a lot of safety precautions must be put in place, as it is a highly technical product.
“Importers should not engage in the importation of cylinders without following the due process, because we ensure that for cylinders to be imported, there must be approvals from the agency.
“These LPG cylinders we are destroying today did not pass through SON’s process and procedures.
“They all failed critical parameters, as the minimum burst pressure for cylinders is 67.5 bars.
“However, these cylinders failed at a very low burst pressure and this is a critical thing.
“Once a cylinder undergoes internal pressure, it is supposed to expand, but these cylinders do not show sign of expansion.
“Some of the seized cylinders were used cylinders and we do not permit the importation of used cylinders into the country,” she said. (NAN)