The impact of government’s efforts in the development and promotion of small and medium scale enterprises (SMEs) in the country must be clear and measurable, according to Vice President Prof. Yemi Osinbajo, SAN.

The Vice President said this is the only way massive funding can be attracted to fund small and medium scale businesses from investors and banks. He spoke earlier today during a  briefing session in his office by the Small and Medium Enterprises Development Agency of Nigeria (SMEDAN), led by its Director-General, Alhaji Bature Masari. 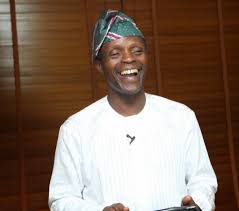 Prof. Osinbajo said scale and focus were key for the agency to achieve the goals for which it was created. Stressing the importance of SMEDAN succeeding in its mandate, the Vice President said a well-structured small and medium scale industry is the way to go if the Nigerian economy must be developed and catch up with the advanced world.

“It is when people are able to do things for themselves, that is when we can say we are developed,” Prof. Osinbajo said.

“No country develops without vibrant small and medium enterprises. It is the base for commerce and industry. We need to scale up. We must design a strategy that allows us to create an impact with the people. This is what the big nations of the world are doing.”

Elucidating on his thoughts, the Vice President said there was need for focus; the kind that is people-oriented in planning and execution.

“Naturally, Nigerians have commercial inclinations,” he said. “The problem is the absence of capacity building. People have ideas, but cannot execute these ideas, some are even lacking in bookkeeping.”

According to him, the Informal Sector is huge adding that “if we can focus on the market women, for instance, and help them build their businesses by training them and arming them with basic business skills, there will be impact, and a positive effect on their value chain.”

Prof. Osinbajo also noted that by directly impacting women, who, according to him, are prudent, that will ensure that the entire community benefits immensely.

Technology start-ups is another area he said should be encouraged by SMEDAN, stressing that the agency must ensure that whatever progress is made in its obligations is measurable. He restated his position that government policies need to be more grounded in the realities of the day, touching the lives of the poor and not just elitist in design and delivery.

His words: “We need to focus on the under served, so that a robust economy can be created. We have 110 million extremely poor people in Nigeria. Take a look at the artisans. We can give them vocational training, which can lead to a certification process and in turn improve their businesses and lives. After which, they can hire more hands and get others out of poverty as well. We need people-oriented focus.”

Responding, Alhaji Masari outlined the many plans SMEDAN had drawn to attract more investment and funding to the SMEs and the frustrations they had encountered. One of them was advising the past administrations to set aside certain taxes on imported items to be used to fund local SMEs.

He also said despite the agency encouraging entrepreneurs to register cooperatives, the Central Bank of Nigeria and the Bank of Industry would always insist on the existence of conventional conditions of providing collateral before giving loans rejecting the cooperative lending models practices in several other nations.

Meanwhile, the Vice President also received earlier today the executive members of the Northern Reawakening Forum, led by its chairman, Hon. Mohammed Kumalia. The Forum leaders said they were visiting the Vice President because he had shown deep concern for the victims of the insurgency in the North East and had visited and interacted with them.