The Federal Government has commended farmers across the country for their contribution toward exiting the country from recession. 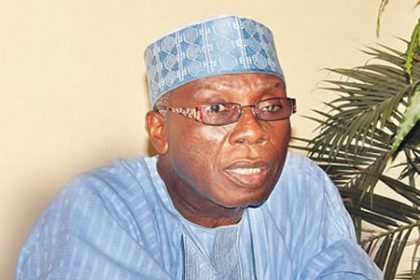 The News Agency of Nigeria recalls that the National Bureau of Statistics released a report indicating the exit of the country from recession with agriculture being one of the contributing factors.

Chief Audu Ogbeh, the Minister of Agriculture and Rural Development, while briefing newsmen in Abuja on Friday, said that both small holders and big time farmers contributed immensely to the exit.

Ogbeh, however, appealed to farmers, middlemen and traders to avoid indiscriminate increase in the price of food items.

He said that Federal Government would not impose price control on food prices, noting that the only option was to improve food production.

According to him, agriculture is contributory and we will continue to contribute but government is not falling asleep.

“I also want to thank Nigerians, especially the farmers (big and small), who have yielded the call of Mr President to return to the farms. They have done amazing things.

“And if there are any new zeros in this country, they are the ones who contributed. I am also happy for them because they are now making money. For a long time, they didn’t make money which is why many of us ran away from agriculture.

“Few days ago, I appealed to middlemen and transporters to try and help us out because I have seen tactical examples of why food prices are so high.

“I am sorry that the food prices are still high but I am appealing to farmers and middlemen, let all of us enjoy the surplus so that no sector will put pressure on the other.

“We have tried in two years but we have to work even harder and keep moving because the danger is still ahead.

“We have to increase agriculture, export, processing and value addition and reduce imports,’’ the minister said.

On the high cost of locally produced rice, Ogbeh said the government was negotiating an arrangement with rice farmers to bring down the price of paddy from one N150, 000 to N120, 000 per tonne.

According to him, the drop will help millers sell a 50kg bag of rice at N13, 000 which would be affordable to citizens.

“I am begging the farmers to be reasonable. I can’t force them,’’ he said.