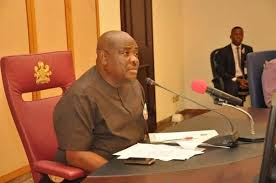 Gov. Nyesom Wike of Rivers on Friday said the synergy between the Federal Road Safety Corps (FRSC) and the Rivers State Government has improved the revenue base of the state.

The governor, who made the assertion when Dr Boboye Oyeyemi, the Corps Marshall of the FRSC paid him a courtesy call in Port Harcourt, noted that the synergy between the two organs had been productive.

Wike directed the Secretary to the State Government to liaise with the State Internal Revenue Service to provide office accommodation for the FRSC Number Plate Production Team.

He also directed the Works and Transport Commissioners to collaborate with the corps to produce road signs for safety on the roads.

“It is also necessary for the FRSC to embark on public enlightenment to encourage drivers and road users to respect traffic rules,” Wike said.

Oyeyemi had earlier hailed the governor for making the job of the corps easy through massive road construction and rehabilitation.

The FRSC chief advocated for increased collaboration with the Rivers Government in the areas of number plate production and the erection of road signs across major roads in the state.

He said an effective collaboration between the two organs would boost internally generated revenue for the state.

The corps marshal said that before the end of the first quarter of 2018, the FRSC would establish license production offices in Ahoada and Bonny in the state. (NAN)