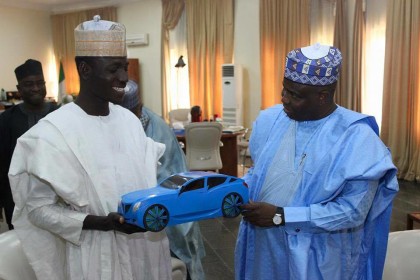 The Governor of Sokoto state, Aminu Waziri Tambuwal, on Tuesday awarded a scholarship to Bashir Aliyu, a young, brilliant car designer to study automotive design in the United States.

According to a statement issued by Governor’s spokesman, Malam Imam Imam,  said already, the Governor has directed the Ministry for Higher Education and the state Scholarship Board to work out the process that will lead to his admission to any college to further his studies in America.

Tambuwal while Speaking when he received the young designer in his office, said his administration “will continue to support exceptional students to further their education in order to achieve” their objectives.

“Having produced world-class car designer in the person of Jelani Aliyu, Sokoto is blessed with brilliant indigenes whose talents would be tapped and nurtured for the progress and development of the state.

“Our choice of United State is obvious. Jelani Aliyu is based there and we expect him to be a mentor to you to achieve your objectives in life,” the Governor added.

The state Commissioner Malam Nasir Zarummai, for Science and Technology, while commenting said the decision to assist the beneficiary fall in line with the present administration’s resolve to assist young people fulfill their potentials.