The Queen’s College Parent/Teacher Association says it is expecting a Visitation Panel set up by the Federal Ministry of Education to investigate the molestation claim by a parent on Wednesday, March 30.
Mrs Beatrice Akhetuame, Chairperson of the association, disclosed this at a news conference on Monday in Lagos. 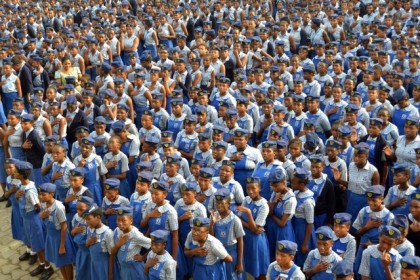 The News Agency of Nigeria (NAN) reports that the panel is on a fact finding mission over an alleged case of molestation by the parent of a daughter at the institution.
NAN further reports that the claim that a male teacher of the institution had sexually harassed a JSS-2 student had gone virile on the social media, as well as other conventional media, but had since been refuted by key stakeholders of the institution.
According to the chairperson, the panel has invited all concerned stakeholders on the matter to appear before it on the set date.
“We as an association have received our own invitation letter and so have all other concerned persons.

“The college management too have received theirs, as well as the accused and the blogger.
“What we are now appealing for is for the woman who gave her daughter’s name as Chinenye Okoye to come forward and collect her own letter of invitation,’’ she said.
Akhetuame noted that the presence of the supposed victim would go a long way in ensuring speedy findings and recommendations on the issue.
Akhetuame, however, expressed surprise that in the midst of the allegation and confusion, the said mother of the girl who is claiming assault on her daughter had yet to disclose her identity.
According to her, it will be to the interest of the college, the management and all concerned persons over the issue to get everyone present before the panel, so as to tackle the issue once and for all.
“I am the representative of parents of the college and therefore, I have the sole responsibility of defending the interest of parents and thye welfare of the girls also falls on me.
“I am a mother of five girls, two of them right here in this college. It will not be possible for me to ever have notice of such incidence and try to cover it up or do anything funny about it.
“I know what it means to train the girl-child and I dare say at all times, my attention is always focused on their activities or issues that concern them.
“It is, therefore, wrong for some persons who do not have enough facts on the issue to go ahead and be casting aspersions on my person or that of the college management, concerning an alleged cover up.
“We are happy the panel is visiting and I pray that the truth behind the entire saga would be unraveled, but as far as we are concerned, no such thing ever happened, even as we await the supposed mother of the girl to come for her invitation letter and reveal her identity to us,’’ she added.
Recently, a parent of a JSS-2 girl claimed that one of the male teachers in the school had allegedly molested her daughter on a few occasions, after the teacher had been around the hostel at night, while he was drunk.
The parent claimed that this happened during the night prep, but school authorities say that besides the Security men, no male staff lives close to the hostel.(NAN)
CCN/PIO/PIO