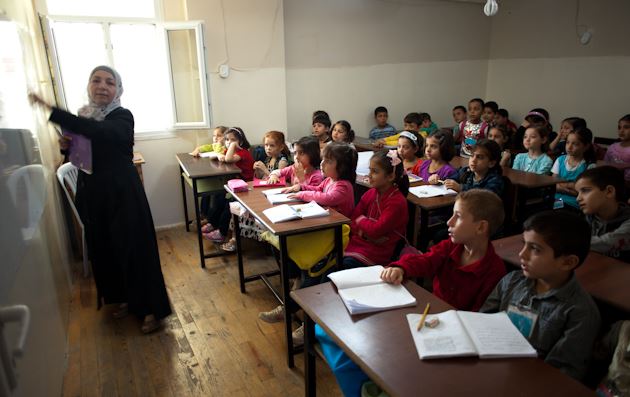 Thousands of Iraqi children have returned back to school and have been re-issued with standard Iraqi textbooks.

The schools have been painted and classrooms fill to capacity as many children return back to school including pupils from the northern town of Qayyara.

However, Reuters reports that it would take a long time to undo the damage that had been done to the kids during the two years reign of the Militants.

ISIS had withdrawn the children’s textbook and issued them with their book of violence in a  attempt to brainwash the children.

As Islamic State’s self-proclaimed caliphate is eroded, a clearer picture is emerging of the group’s project and the enduring mark left on those who lived through it.

“We are happy to be back at school,” said eight-year-old Iman, who like most of her classmates stopped attending classes after Islamic State took control. “They wanted us to come but we didn’t want to because we don’t know how to study in their language, the language of violence.”

When the militants overran the area in the summer of 2014, they allowed schools to run as normal, local people said. But later they banned subjects they considered un-Islamic such as geography, history and civic education, and used boys’ schools as a recruiting ground.

The following school year, beginning in 2015, Islamic State imposed an entirely new curriculum to inculcate children with their ideology. Maths exercises were expressed in terms of weapons and ammunition: “one bullet plus two bullets equals how many bullets?”.

Most parents stopped sending their children to school, and many pupils who were old enough to make up their minds left voluntarily.

As a result, most children have been set back by two grades, and since some teachers have been displaced by the violence, there is only one teacher for roughly every 80 pupils at the girls’ school in Qayyara.

“They have forgotten their lessons… Now we are reminding them,” said their teacher Maha Nadhem Kadhem, pacing around the classroom, in which four girls are squeezed onto each bench made for two. “We don’t want them to be illiterate and ignorant.”

The headmistress, who asked to remain unnamed, said Islamic State’s vice squad known as the Hisba had made regular visits to the school to ensure compliance with the group’s strict dress code for women and girls.

Others such as Farouq Mahjoub, the assistant headmaster of a secondary school for boys in Qayyara, said he had been threatened with death unless he turned up to work, even though no pupils came to class by the end.

“The biggest impact is on children,” said Mahjoub, whose school was hit by an airstrike several months ago. “Children are malleable; you can change their opinion and beliefs quickly.”

Mahjoub said children behaved more aggressively than before, and that the games they play now are violent, estimating it would take no less than five years to reverse the damage.