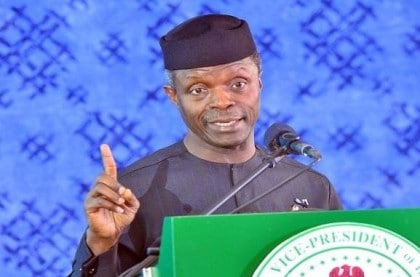 In another demonstration of the Buhari administration’s plan to reverse some of the devastating consequences of insurgency in the Northeast, especially regarding children, the Vice President, Prof. Yemi Osinbajo, SAN on Monday honored 18 school age children who are the winners of the maiden Protecting Education Advocacy Challenge (PEACH) competition. This was contained in the statement released by Laolu Akande, Senior Special Assistant on Media & Publicity to the Vice President.
According to him, PEACH is a talent development initiative aimed at encouraging the education of children affected by the conflict in Borno, Adamawa, and Yobe, by turning the children to advocates of schooling and education.
Also Read;  Vice President Osinbajo Leads Nigeria’s Delegation To AU Summit In Rwanda

The brief ceremony for the children aged 9 and 18, was held at the Vice President’s conference room amidst cheers from organizers of the competition, their teachers, and government officials.

The 18 winners emerged from over 3,000 children attending schools in Internally Displaced Persons (IDPs) camps and in communities hosting people displaced by the Boko Haram insurgency in Northeast Nigeria.

The highpoint of the ceremony was the presentation of gift items comprising books, solar panels, and accessories to the winners, to aid the provision of electricity in their various homes.

Vice President Yemi Osinbajo, who was visibly elated at the presence of the children in the State House, assured them of a better future and urged them to remain focused and work hard to live their dreams.

In a very relaxed interaction with the children, the Vice President told the children “you are stars,” and congratulated them for winning the competition, noting that “the sky is the limit’’ to whatever they wanted to become in life.

He said: “I think you are all important stars. I must also congratulate you for winning this competition.

“I know that if you continue to work very hard and act honestly, you tell the truth, you will become lawyers, you will become teachers, and several other professions of your choice, and you will do very well.

“I am very sure that you want to be lawyers, doctors, nurses, technology experts, power expert, professors; the sky is your limit, as they say, and I am sure that you will achieve everything that you set for yourselves.“

Prof. Osinbajo who also responded to questions from the children said the government would work on developing a formidable mentorship program to aid their education.

According to Vice President, “I think that we need to look at other creative ways of providing mentorship not just for the winners of the competition, but also for other children.

“We are going to make sure that we keep being with you all so that you can achieve all that you have planned to achieve.“

He assured the children that government would expand the scope of the mentorship program being developed by organizers of the PEACH competition to make it more creative and enduring.

The Vice President also hinted establishing special schools to accelerate talent development as well as the education of IDPs in the Northeast.

According to him, “we will look at what we call an integrated learning center where young children can learn, and not just live there, but also have all the facilities to learn, to read, write and be creative in a very conducive environment.“

He said: “a special type of school that has all the facilities’’ would be key in harnessing the true potentials of children whose communities and homes have been ravaged by the Boko Haram insurgency.

“I think that if you go to a school that has the right environment where everything has been provided, you will really have an opportunity to be the very best that you can be, so we are going to look at that carefully and make sure that the children are provided with the best possible education.’’

The Vice President, who has always been enthusiastic about addressing the plight of IDPs in the Northeast, said providing the best opportunities for the education of children in the region remained a priority for the government.

Earlier, the Senior Special Assistant to the President on IDPs, Dr. Mariam Masha, said the competition was meant for children who have been affected by the conflict in the states of Borno, Adamawa, and Yobe.

She said the focus was on children in the camps as well as those in host communities who were receiving a formal education.

According to Masha, “It was a competition on how education can protect the children’s future, we also encouraged arts, so children can express themselves by drawing and also drama for those who can’t read or write.’’

A total of 3,397 children who participated in this comprised 812 from Yobe, 1, 230 from Adamawa and 1, 337 from Borno state. It is from this, that the final 18 children emerged as winners from their various states.

“Also interesting was having the children working in their states to produce the advocacy video on the importance of education,“ Masha added.