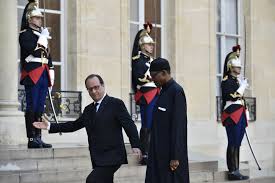 FG is Seeking Collaboration With France For The Training Of Basic Education Teachers To Teach French Language.

The Minister of State for Education, Professor Anthony Anwuka stated this while receiving the French Ambassador to Nigeria, Mr Denys Gaver in his office in Abuja.

The Minister said though Nigeria had received assistance from France, more was needed to be done in the training of French teachers in basic and secondary schools.

Professor Anwuka, who said that Nigeria was motivated by the dream of actualizing the French language as her second official language, stressed the need for the country to fully train her teachers to enhance the knowledge of the students at all levels.

According to him “its a matter of necessity following the nature of border countries such as Cameroon, Republic of Benin, Togo,Chad,Guinea surrounding Nigeria.

It is good for the African continent to communicate better with each other as brothers. In Nigeria, the French language is pertinent”

Declaring the French Clinic open in Federal Government College, Apo, the minister said that with the French clinic in basic schools, students would be able to speak,write and communicate in French.

“The clinic is a demonstration of the Nigerian government to the French language. It will enable networking with over 40,000 french teachers in Togo, Benin and France.”

Being multilingual is an asset in today’s world.”

The France Ambassador to Nigeria, Mr Denys Gaver, emphasized the importance of education in the development of Nigeria and other countries.

He said his visit was to encourage Nigeria in its adoption of the French language as her second official language and to also inform the government that France was interested in the expansion of the language in basic education.

Gaver encouraged the federal government to make French mandatory in basic schools in Nigeria, adding that France was ready to help .

He said that there were 10 Alliance Francaise centers currently operating in Nigeria and a few similar institutions in Abuja and other regional centers.

In 1998, the Federal government declared French, the second official language of Nigeria, based on several activities that connect Nigeria to its French speaking neighbours.