As part of its efforts to raise befitting role models for the younger generation of Nigerians, the National Orientation Agency (NOA) has decorated 10 year old Miss Splendour Joe King as its first child Peace Ambassador. 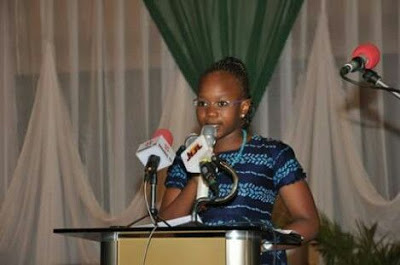 Conferring the ambassadorship at the International Conference Centre Abuja, the NOA Acting Director General, Mrs. Ngozi Ekeoba said Splendour had demonstrated uncommon passion in drawing universal attention to the unmitigated tyranny suffered by the vulnerable Nigerian child because of insurgency in the country.
Ekeoba who also served as reviewer of Miss Splendour’s new book titled “The Effects of Terrorism on Children” which was launched at the same event, identified Splendour’s advocacy efforts in recent times as indicative of the girl’s potentials for activism toward a safer society for her nation and generation. Describing the book as “a potent and deeply penetrating voice for the voiceless Nigerian children agonizing in the social squalor of Internally Displaced People’s camps”, Ekeoba challenged Nigerians to rally support to alleviate the plight of children affected by the wave of terror and pervading insecurity rather than leave the burden for government alone to bear.
She said the book was a vivid testament of the institutional failure and sheer irresponsibility of the adult to the up-coming generation, calling on parents to nurture their children in morality and inculcate in them the virtues of love, peace, patience, tolerance and mutual respect. She also urged religious leaders to preach the tenets of true religion and avoid indoctrination and sermons which tend to divide the people and give rise to various forms of extremism.
Speaking on the inspiration for her book, Miss Splendour said she had always had a passion for children, especially those affected by terrorism, adding that the non-fictional book was based on facts and experiences of real victims of insurgency in the North East of Nigeria. She expressed conviction that a positive change on one child today is the positive change of an entire generation, observing that the terrorists of today were once children, hence her desire to influence children toward peace and tolerance through her book. She disclosed that arrangements have been made to translate the book into local and international languages to reach a wider range of children across the world.
The NOA Peace Ambassador and author called on government to address the root causes of terrorism including injustice, unemployment, poverty and insufficient education on the causes and effects of terror.
Goodwill messages from the international community, including the United Nations Children’s Emergency Fund, represented by its Manager of Child Protection in Emergencies, Mr. Anil Raghavanshi and the Ghanaian High Commissioner to Nigeria, His Excellency, William Kanyirige expressed delight that Miss Splendor King, whom they described as a Peace Ambassador in the mold of Malala Yousafzai, was in the making for Africa and the world.