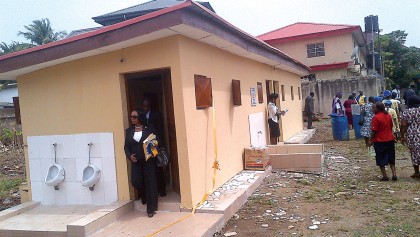 The Onigbongbo branch of Rotary club has spent N1.5 million on the renovation of toilets, provision of water and wash-hand basins at Wright Memorial Primary School, Somolu, Lagos.

The inauguration of the projects held recently as part of activities to welcome the District Governor, Pat Ikheloa, to the club’s area of jurisdiction.

Sola Benson, the clubs President was overwhelmed by the visit of the district governor. He said the project was started by his predecessor, Mr George Dasaolu, but completed by him as soon as he assumed office few months ago.

He said the driving motive for the club to embark on this project was it discovery that the school had only one pit latrine for over 400 pupils.

He said the initial cost for the project was N500,000, but it was done for N1.5 million due to inflation.

Ikheloa said Rotary believes in assisting people and the school’s programme was one of their numerous contributions to Nigeria and making life better. He said the funds for the project came from Rotary and that the government had no hand in it. He urged the school’s authorities to ensure that the toilets were well-maintained.

The school’s Assistant Headteacher, Mrs Iyabode Quadri thanked Rotary for the gesture, which she said would avert an epidemic and promote good health in the school. She promised to maintain the toilets, adding: “That will be no problem.”

The school’s Headgirl, Adewoye Oyinkansola said: ”We thank Rotary Club. We are grateful for the new  toilets you have provided for us.”