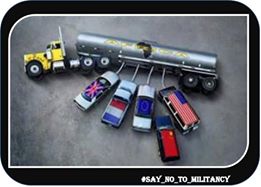 Squi Ukre: WHAT CAN YOU PICTURE OUT FROM THIS PHOTO?

For once we the people of Niger Delta have to think outside politics. We all see things from different angles and different view. my view might be foolish but can go a long way if we try put it to work.

Nigeria is the bedrock of Africa, and Niger Delta is the bedrock of Nigeria, that is to say the exact spot where these billions are coming into is Niger Delta. The investors are knocking on our doors with Billions of dollars in their hands waiting, but no investor would invest in where there is insecurity, violence, kidnappings, robberies, and extortion of money from them; for they are simply business men. They cannot come in right now as Nigeria is hot, Niger Delta is boiling as we have been blacklisted.

We are fighting FG to come to Develop us as we are underdeveloped and marginalized, while the FG is even struggling to develop and take care of itself. We are fighting Federal government for peanuts, while investors are with Billions watching and waiting for us to be calm so they can come pour this billions on Niger Delta for massive investment and development. But due to the hotness and politics of election aftermath, we are being blinded, to blind to hear or see the billions of dollars knocking on our doors as we are busy fight the FG over peanuts.

FG spent $40 Billions dollars for the development of Niger Delta between 2009-2015 and it seems like hugh money, when one investor can invest $100 Billion dollars in one month into Niger Delta if we all act like fools but we know what we are doing.

FG Budget for 2016 is six (6) Trillion Naira which they have not been able to raise half of it, and we are too focus fighting FG to get our share to develop Niger Delta from this government purse, making us blind to see more than six trillion dollars knocking on our door to develop us without the help of the FG government.

The FG can only develop 5% of Niger Delta between now and the next 20 years, but ourselves with the foreigners can develop Niger Delta 95% within the next 5 years. It is 100% possible.

Why fight FG for peanuts when we can acquires Billions of dollars from foreigners in a shortest time without lifting a single weapon or raising our voices to make much noise? This is why we have to put our political cap and glasses aside, turn away from the Federal government to look outside Nigeria to the Millions of billionaires with cash to spend on Niger Delta and let them bring in this money and development to us with immediate effect before it becomes too late.

To catch a monkey, we must act as monkeys. This is why we must all come up publicly before the world to condemn militancy, kidnappings, robberies, and extortion of monies from companies, starting from our political leaders to the Least Deltan all condemn this act of militancy. simply denounce militancy, educate your people on the profits and gains foreigners and investors would bring into the state if we allow them to walk freely on our streets, do their businesses without harassing and extorting monies from them. Educate the youths to stop robberies, kidnapping, and extorting monies from oil and non-oil companies.

Make lots of adverts on the Internationals and local medias of how we have ended militancy in Niger Delta You invite one or few white men even from near Abuja or Lagos into the Niger Delta to walk the streets without security, take selfies and video in our street to show to the world that we have stopped kidnapping, robberies and militancy.

Let the white man sleeps in the nearest hotel, buy food from local food sellers, art sculptures and beads from the ordinary man in the street, even bottle water, party in our beaches. And he would returns backs home to his country and tell his people that he walked freely in the street of Niger Delta and he had great time with the people, and two or three of his family would come back with him to also have the same fun as they spend the monies they bring into the country in Delta state as all these puts money even to the pocket of the ordinary man or woman in the street as well.

They also would return and inform their friends and family and business partner of what they saw, one or two business opportunities which the Niger Delta man have not been seeing for many years, even if he has been seeing it, he has no money to start up, and they would returns with billions and Trillions of dollars to invest in one month what would take the FG 20 years to do.

And more and more of the foreigners and investors would be coming in to our communities, invest in our streets and communities and we start prospering more than the FG and other part of Nigeria that they would begin to envy us as every Delta would start to earn not less than $2000usd compare to the minimum wages of $50 (N18,000) we are not even able to pay workers for many months right now. we would soon become so industrialized without the help of the FG or depending on the FG peanuts instead of condoling militancy, robberies, kidnapping and illegal extortion of monies..

We can act fast better than Lagos now. A billionaire, one of the world’s famous walked down the street of Lagos without security, jogged on the street of Lagos without being harassed or kidnapped. Do you know what signal it sent to Billions of Investors who would be coming to make Lagos state Business Destination while we are still busy playing politics and fighting Federal Government for peanuts? Now it is time to wear our thinking cap to take the massive share of the monies in the hands of this investors, to develop Niger Delta with infrastructures more than any part of Nigeria, Africa and the world. Wise up.