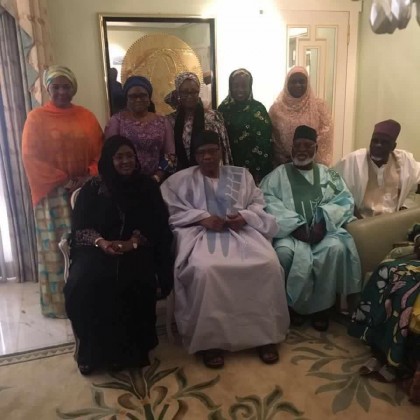 The wife of the Niger state governor Dr Amina Abubakar Bello launched her ‘Raise Foundation’. The launch in Minna was performed by the wife of the president Her Excellency Hajiya Aisha Buhari who opened the Rise Foundation Cancer Screening Centre. In notable attendance were HE Alh Abubakar Bello the Niger state governor, her parents Former President Abdulsalam Abubakar and Justice Fati Abubakar , wives of state governors, developmental partners other NGOs and women groups. Mrs Buhari praised the effort of Dr Amina and assured her support. She then presented the consultant obstetrician and gynecologist with mama birth kits for the use of women in Niger state. The Rise foundation has already screened over 2000 women in the state for cervical cancer and recently received the donation of a cryotherapy machine from a leading international NGO. A cryotherapy machine is used for treating cervical cancer.

In an earlier meeting, the Medicaid Cancer founder and wife of the Kebbi state Governor Dr Zainab Bagudu congratulated her colleague and called on Rise Foundation to join hands with Medicaid so they can improve cancer diagnosis and treatment in Northern Nigeria. More especially as Kebbi and Niger state border each other and share similar cultures and beliefs which might positively or negatively be affecting women’s access to their lifestyle health care decision making process.