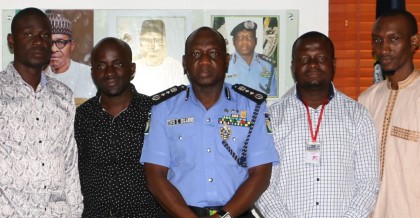 Don Awunah, Abuja: The public trust reposed in the Force leadership of the Inspector General of Police Ag. IGP Ibrahim K. Idris NPM mni, continued to receive boost; as the newly elected executive members of National Association of Nigerian Students led by its President elect, Comrade Haruna Kadir, paid a courtesy visit to the Inspector General of Police on the 6th September, 2016 at the Force Headquarters, Abuja.

The Inspector General of Police Ag. IGP Ibrahim K. Idris NPM mni, expressed his appreciation to the Students Union President and his executive for finding time to visit him. He applauded their good conduct and democratic values displayed during their last national convention held in Abuja. He urged the Association to always embrace dialogue and use communication as imperative ingredient to resolve conflict. He also enjoins them to shun crime and vices within and outside the student communities. They should maintain a good communication link with Commissioners of Police of various commands across the Country.

The IGP assured the NANS leadership of the determination of the Nigeria Police Force to continue to cooperate with them most especially in the prevention and reduction of violent crimes and other vices within the student communities.

While speaking, Comrade Haruna Kadir and his EXCO call for increased Students and Police partnership. He use the occasion to appreciate the Nigeria Police Force for the elaborate security coverage provided for them during the Association’s recent National Convention held in Abuja.

The NANS President lauded the IGP’s Stance on zero tolerance to corruption, his commitment at ensuring assets declaration by officers and men of the Force. He further intimated the Inspector General of Police that, since his assumption of office NANS have been monitoring closely his security trips to various parts of the country, such as Niger- Delta region, North –East, and of recent Lagos State. This has yielded positive results with a resultant crime reduction throughout the Country. He pledged more supports and close partnership with the Nigeria Police Force.