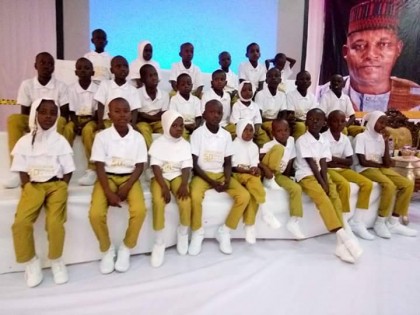 Isa Gusau, Maiduguri: To mark the 50th birthday anniversary of Governor Kashim Shettima, some friends and well wishers awarded scholarship to 50 children orphaned by the deadly insurgency bedeviling the northeast for over six year with insurgency by the dreaded Boko Haram terrorists.

The anniversary was sponsored by a group of 30 friends, family members and political associates of the governor.

Zenith Bank Plc has offered scholarship to another set of 50 children orphaned by Boko Haram insurgency to celebrate the 50th birthday of Borno Governor, Kashim Shettima who is a former management staff of the Bank. The total fees for tuition, text books, note books, school bags, uniforms and school shoes were all paid upfront by the Bank to take care of the next 9 years of the orphans’ education from the year 2016 when they will begin pre-nursery school to the year, 2025 when they are expected to complete primary school.

Officials of Maiduguri main branch of the Zenith Bank handed over two bank drafts written in favour of Maiduguri Capital School to Malam Isa Gusau, spokesman to Governor Shettima who coordinated a 50th anniversary reception organized by a group of friends, family members and political associates of Governor Kashim Shettima.

On Tuesday, Gusau confirmed receipt of bank drafts meant to cater for the education of the 50 orphans, made up of boys and girls from 2016 to the year 2025 when they are expected to graduate after passing through pre-nursery to primary 1-6 levels.

With the Zenith Bank’s gesture, the total number of orphans who will be benefiting from scholarship in commemoration of Governor Shettima’s Birthday has risen to 100.

The brief reception, chaired by immediate past Kano State Governor, Senator Musa Rabiu Kwankwaso, was held on Monday, at the multi-purpose Hall of the Government House, in Maiduguri.

At the event, Secretary to the Group of sponsors, Malam Isa Gusau who is also spokesman to Governor Shettima, had announced a list of 30 donors who made payments of various sums into his personal Bank account, from where he, in turn issued bank drafts, to pay for the education of the 50 orphans.
The Zenith Bank also sponsored additional 50 orphans after being satisfied with the commitment exhibited by Governor Shettima’s associates.