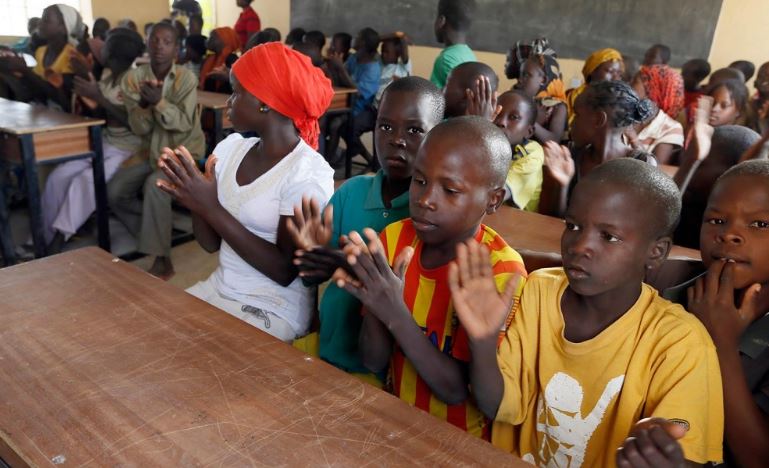 The Grand Finale holds Thursday in Maiduguri, Borno State where the finalists will present their education advocacy videos at an event to be attended by dignitaries and functionaries from across the three states.

The Protecting Education Advocacy Challenge to reorient children affected by insurgency in the 3 Northeast states was announced November 20 and kicked off soon after garnering 3,079 of such children showing keen interest in the competition by turning in their entries.

“The enthusiasm and active participation of these children in the Essay Competition is indicative of their willingness to be the voices raised so that education is protected for them,” according to the Senior Special Assistant to the President on Internally Displaced Persons, IDPs, Dr. Mariam Masha.
The eighteen finalists, six from each state were the lucky winners out of 3,079 entries received from the three states, with Borno having 1,337, closely followed by Adamawa with 1,230 while Yobe had a total of 512 entries.

The winners from Borno are Aisha Musty and Bukar Abdulrahman in the 8-11 years category; Abubakar Musa and Zulai Mikaila in the 12-14 Years Category and Hauwa Bulus and Kaka Emmanuel in the 15-18 years category.

From Adamawa State, the winners are Emmanuel Andrawus and Faith Mathew in the 8-11 Years Category; Prince Midenda Napatali and Abba Gana-Bundi in the 12-14 years while in the 15- 18 years category are Grace Markus and Ali Bulama.

This education advocacy which raises the voices of the children as advocates is a model that directly engages the children in conversations concerning their educational visions and helps to create a sense of involvement and enhance the success and sustainability of their education.

It is targeted at school-aged children displaced in the North East States of Borno, Adamawa and Yobe and the competition commenced simultaneously in the three states witnessing unprecedented acceptance as thousands of enthusiastic school aged-children obtained their entry packs in the Primary, Junior and Senior secondary schools categories.

In Borno State, a total of ten IDP Camps participated including Dalori 1 and 2, Bakassi A & B, Teachers Training College, EYN, Farm Centre, Gubio, NYSC, and Bokolis, all spread across the state.

In Damaturu, the Pompomari IDPs Camp, host communities and schools such as Government Secondary School in Gulani, Goniri, Bularafa and Government Day Secondary School in Buni-Yadi, Bukar Ali,Bindigari and  Nayi-nawa submitted entries while their counterparts in NYSC , Makoyi and Fufore IDP Camps in Adamawa State also participated in the Essay writing competition.

Its cardinal objectives include the adoption of children as main advocates of education and voices countering every form of extreme violence in order to break the radicalization process of insurgency and other violent acts.

With the essay writing over, the expected eighteen winners, six from each of the three states are to develop an advocacy campaign video which will be presented by the children themselves before a live audience at the finals in Maiduguri, the Borno State Capital on December 8th.

Also, as parts of the advocacy, series of drama presentations, community events and focused mentorship are being staged in the camps, to provide an uncommon window to take the counter-terrorism fight from the battlefield right into the minds of these children.

This advocacy programme will complement the Federal Government’s ongoing recovery efforts in the North-East by using education as a tactical tool to return dignity and normalcy to the affected children and to actively engage these children in advocacy to counter violent extremism.