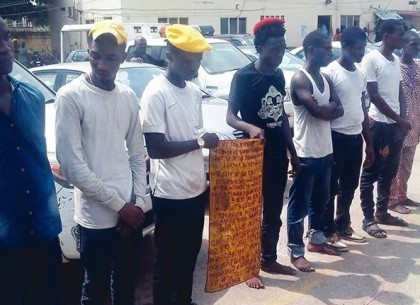 Fifty eight ex-cultists from various institutions of higher learning in Kogi State have renounced their involvement in the act with a pledge to assist security agencies in the fight against cultism.

They made their position known at the inauguration of the Kogi State chapter of the Nigerian Police Force Campus Cult Eradication Foundation at the state police command headquarters, Lokoja.

President Muhammadu Buhari has directed the Minister of Finance, and the Governor of the Central Bank of Nigeria to release the second tranche of the London-Paris Club refund to state governments towards easing their financial hardship.

At an audience with members of the Nigeria Governor’s Forum, the president emphasized that the order must be carried out appropriately and with dispatch.

President, Council for the Regulation of

Engineering in Nigeria – COREN, Kashim Ali during a press briefing on the outcome of the first quarter council meeting for 2017, he emphasized the need to restructure and resuscitate technical colleges across the country in order to turn around the fortunes of technical education and encourage professionalism in engineering practice.

Mr. Ali said they also deliberated about the unethical behavior of one of its members and deferred the matter to the investigation panel.

CORENs mandate empowers it to regulate and control the practice of engineering profession in all its ramifications.

Members of the European Union, the United

States as well as Japan have re-affirmed continued commitment towards the development of Nigeria’s Niger – Delta Region.

This came to the fore at the end of a meeting

With the minister of Niger-Delta Affairs, Usani

During a media briefing in Abuja the Director General of the Consumer Protection Council (CPC), Dupe Atoki, stated that the council has issued the Nigerian Bottling Company plc a SEVEN (7) day ultimatum to provide it with information concerning health implications regarding the consumption of some of its products.

Onyeama Speaks on Efforts of the Nigerian Government

The Nigerian Minister of Foreign Affairs, Geoffrey Onyeama says the Nigerian Government will continually toile the path of diplomacy in her relations with other countries.

In an interview he granted while on a visit to South Africa, the minister reiterated that the Nigerian government is building a long term foundation for more responsive governance, in order to ensure a better protection of Nigerians outside the country.

The newly appointed Director General of the

Dr. Paul Adalikwu, a member of the Institute of

Tourism Practitioners was appointed by the Federal government on the 10th of this month to take over from Mariel Rae-Omoh. Before his appointment, Dr. Adalikwu was the Director, policy Analysis Research and Statistics, Federal Ministry of Labour and employment.

A statement by Brigadier General Sani Kukasheka Usman, Director Army Public Relations says the terrorists who came with some vehicles at about 6.00pm attempted to set the town ablaze and kill the residents but the timely intervention of the troops prevented that mishap.

The troops have neutralized quite a number of the attackers and those that escaped with gunshot wounds are being pursued.

So far, it has been said that the troops have recovered 3 vehicles and large quantity of arms and ammunitions.