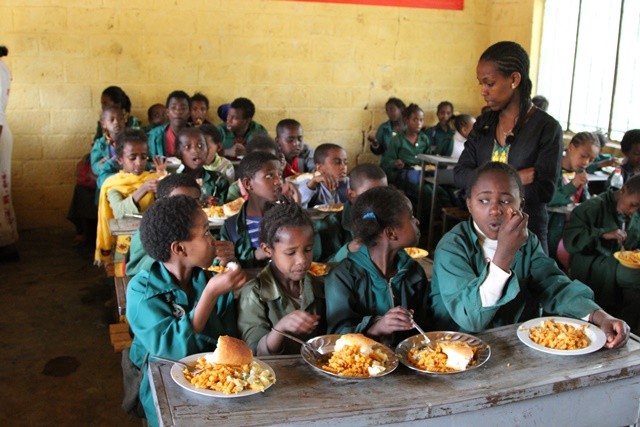 Douglas Okoro/Abakaliki: Concerned citizens in Ebonyi monitoring the implementation of the Federal Government’s Home Grown Feeding Programme initiative have decried the way and manner in which the programme is being run in the state.

They spoke in separate interviews emphasising the need for the operators of the programme to follow the guidelines as stipulated by the Federal Government.

They noted that primary school pupils were not being served quality food for the five school days as stipulated by the FG’s guidelines.

NAN recalls that Ebonyi was one of the five states that received N400 million for the continuation of its Home-Grown School Feeding Programme in January 2017.

Under the free Home-Grown School Feeding Programme, an estimated 5.5 million pupils in the five states including Ebonyi would be fed for 200 school days and N93.1billion has been appropriated for the feeding scheme in the 2016 budget.

Mr Jerome Nwoba, a concerned citizen keen at monitoring the programme, told NAN that government’s intention was being thwarted due to the manner the programme was executed in the state.

According to him, primary school pupils were fed with less than N30 for a meal as against N70 approved by FG.

He said that the vendors claimed that they were only managing with little resources made available to them by their handlers.

“The programme is a total failure in Ebonyi and an urgent review of the programme is needed including an investigation into how money is being released to fund the programme in the state; this is necessary to salvage the appalling situation.

“Vendors are provided with about N20,500 to feed 43 pupils for five days in some schools while the amount is less in some other schools.

“If you break down the amount, it’s less than N30 a day per a meal while FG provided N70 for a meal per a day.

“I guess some persons are somewhere allegedly sabotaging the efforts of the Federal Government and an urgent probe will unmask the elements undermining the programme.

“In all the three primary schools visited in Izzi Local Government Area including Achara Unuhu, Akpurata and Amanato community primary schools, the story is the same, ” Nwoba said.

He said that the food vendors were threatening to quit the programme unless the FG intervened and addressed the noticeable lapses.

Another concerned citizen, Mr Ikechukwu Ogbonna, said he monitored the implementation of the programme in three schools and interacted with cooks in the different schools.

He said that the cooks complained of underfunding, making it impossible to serve the pupils with decent meals.

He further claimed that the affected cooks have threatened to quit the programme unless there was proper funding of the programme.

“In Adangene community primary school, Effium in Ohaukwu Local Government Area with 115 pupils only N21,000 was released to feed them for five days.

“In Akpe-Amanachi community primary school in Abakaliki Local Government Area, the story is not different; N6, 000 was released to feed a school population of 134 pupils for five days, and no feeding has taken place for two weeks now in the school.

“In Amandim community primary school in Mgbom, Ugwulangwu, Ohaozara with 85 pupils, N21,000 was released to feed the pupils for five days.

“In most cases, pupils are served food on their palms and in a most unhygienic manner, ” Ogbonna said.

Mrs Queen-Juliet Ijezie said only one out of five schools she monitored in Izzi local government area fed the pupils once since the school feeding programme began in the state.

The Ebonyi Commissioner for Education, Prof. John Eke, however, says the Federal Government’s Home-Grown School Feeding Programme in the state has been “a massive success” contrary to the view of monitors of the programme, who warned that the programme is being derailed and will collapse.

Eke, who is also the chairman of state implementation committee of the Home-Grown School Feeding Programme, told the News Agency of Nigeria (NAN) on Tuesday in Abakaliki that the initial challenges encountered by the cooks in the programme have been overcome.

According to him, the cooks were initially unable to access their money deposited in Heritage Bank which he said had only one branch in the state.

The professor said the state government’s intervention made Federal Government use First Bank which eased the problem of cooks accessing fund deposited in the bank for the programme because the bank has many branches.

He said that government and its agents have no direct access to the fund meant for the programme.

Eke, however, said the N70.00 allotted for the meal of each pupil is not enough to provide a pupil with a balanced meal because an egg cost N40.00 in view of the rising costs of food items in the market.