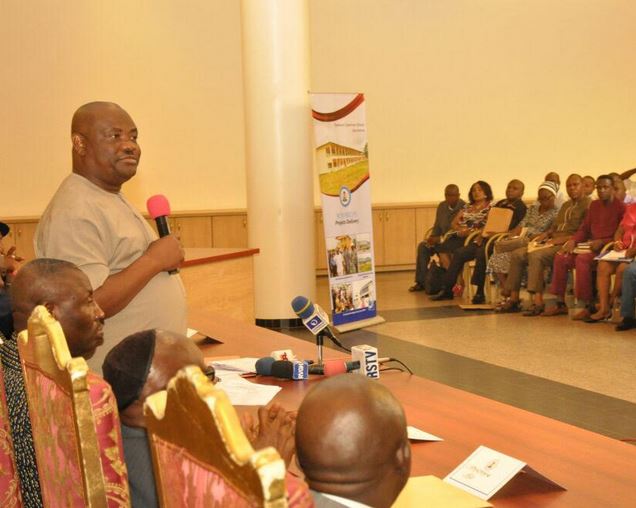 The Rivers Government has closed no fewer than 1,886 schools operating without government’s approval,  Gov. Nyesom Wike said in Port Harcourt on Tuesday.

Wike made the development  known when the management staff of Jesuit Memorial College, Mbodo-Aluu, paid him a courtesy visit.

He said the schools were shut for failing to meet specified standards of the state Ministry of education.

He said that parents patronising the affected schools had  been told to relocate their wards before the next academic session began.

According to him, the government will  fully implement measures aimed at strengthening the state education sector by September.

“We want to maintain standards that will uplift education in the state,” Wike said.

Wike also explained that his administration was committed to transforming the state and empowering its people through an enhanced education sector.

He condemned examination malpractice associated with some illegal schools operating as West African Examination Council (WAEC) centres in some remote parts of the state.

According to the governor, most illegal schools have become WAEC magic centres where examination malpractices are promoted.

He, however, commended the management of the Jesuit Memorial College for establishing a branch in Rivers in honour of the 60 students who died in the Sosoliso air crash in Port Harcourt on Dec.10, 2005.

He assured them of the state government’s support to ensure that the school served the people better.

Earlier, the Principal of the school, Rev. Emeka Asogwa, explained that the school was established in memory of the 60 students of Jesuit Memorial College, Abuja, who died in the  air crash.

He commended the state government for partnering  the school in infrastructural development.

He also appealed to the governor to assist the school to get  the Certificate of Occupancy for the 21 hectare of land allocated to it by the state government.