President Muhammadu Buhari has directed the Minister of Education to convene a ministerial summit on education within the next few weeks. 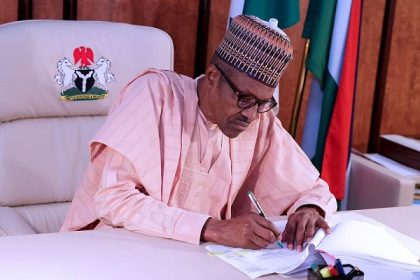 The President gave the directive on Saturday in Ilorin, in his address at the 33rd Convocation of the University of Ilorin.

The president was represented by Prof. Abubakar Abdulrasheed, the Executive Secretary of the National University Commission (NUC).

He explained that reason for the summit is to tackle major problem facing the education sector.

According to Buhari, this is with a view to restore education to its lead role of human development game-changer.

“My government will not allow the country to miss the globally agreed Sustainable Development Goals (SDGs) train, the driving force of which is education.

“Any success recorded in education will have a ripple effect on every other sector of our life,” he said.

The President also warned against excessive display of intolerance, rancour, hostility, mutual suspicion and all such acts capable of causing social unrest in the country.

He said: “Those who fan embers of division must refrain from the unacceptable tendencies; retrace their steps and learn to live together with one another”.

President Buhari added that the government will only recognize legitimate aspirations of the citizens but should be done with good faith, within the bounds of rationality and without infringing on the rights of others.

Earlier in his address of welcome, the Vice-Chancellor of the University of Ilorin, Prof Sulyman Abdulkareem, reminded the graduating students that the economic climate in
Nigeria is unfavourable.

He said how the students comport themselves in the trying times goes a long way in testing the ideals for which the institution is known.

“The will to win, means nothing without the will to prepare”; adding that as ambassadors of Unilorin, they must be diligence and reduce quest for materialism.

The VC said that a total of 9,018 students graduated from the University out of which there are 89 first class, 1,932 Second Class Upper Division, 3,727 Second Class Lower Division, 1309 Third Class, 117 Pass and Two Aegrotats.

Also speaking at the ceremony, Gov. Abdulfatah Ahmed of Kwara, call on the University to adjust their curriculum to meet modern day needs of labour and the world.

Ahmed, who was represented by Dr Amina Ahmed, Kwara Commissioner for Tertiary Education, urged the graduates to be job creators rather than job seekers.

The News Agency of Nigeria (NAN) reports that other event at the Convocation is award of 27 prizes to Dr. Rashidat Alabi, a Medical Graduate from Faculty of Health Science of Unilorin. (NAN)