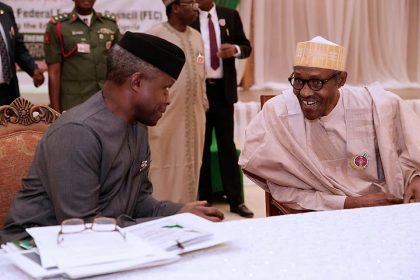 The President made this known when he declared open a special retreat of the Federal Executive Council on Education, at the Presidential Villa, Abuja.

It would be recalled that the administration of Gov. Nasir El Rufa’i came under attacks, recently, especially from the Nigeria Labour Congress (NLC) over plans by the governor to sack at least 21, 780 primary school teachers, who could not pass a competency test.

The development which did not go down well with the leadership of the NLC prompted a protest on Nov. 8 over what it described as `obnoxious plan’ by the state government to sack the teachers.

However, Buhari while decrying the rot in the sector, said Nigeria could not progress beyond the level and standard of its current educational system.

“To digress a little bit so that you know that I meant what I read.

“Having been an orphan, I still feel that whatever I did in life so far was built by boarding school. For nine years I was in boarding school, three in primary and six in secondary school.

“In those days, teachers treat their students or children like their own children. If you did well they will tell you, you did well, if you don’t do well they never spared the rod.

“And then I listened to one of the Nigerians I respect, he said after his training here in Nigeria and the United States, he went to his alma-mater, his primary school to see what he could contribute.

“I won’t mention his name but when he went, he couldn’t differentiate between the students, the children and the teachers.

“And what El-Rufai is trying to do now is exactly what that man told me about 10 years ago. It is a very, very serious situation, when teachers cannot pass their exams that they are supposed to teach the children to pass.

“It is a very tragic situation we are in and this our gathering together to me is one of the most important in this administration.”

Buhari said with the rot in the education sector, drastic measures had become necessary to salvage the situation.

He said the All Progressive Congress (APC) which he rode on to become President was committed to all the electoral promises made to revamp the education sector.

He also revealed that current statistics of out of school children stood at 13.2 million up from the 10 million estimated by the United Nations few years back.

“We cannot afford to continue lagging behind. Education is our launch-pad to a more successful, more productive and more prosperous future.

“This administration is committed to revitalising our education system and making it more responsive and globally competitive.”

He commended the Ministry of Education for setting the stage for this national conversation that aimed at refocusing the education sector.

The president expressed the hope that the retreat would not only overcome the numerous challenges facing the nation’s education sector, but also to strengthen the Ministerial Strategic Plan that had already been developed by the ministry.

He said: “The significance of this summit is obvious. We cannot progress beyond the level and standard of our education.

“Today, it is those who acquire the most qualitative education, equipped with requisite skills and training, and empowered with practical knowhow that are leading the rest.

“Education upgrades the living standard of citizens and enables people to become better and more productive citizens. It is a human right that creates a safe, healthy and prosperous society.

“These efforts are justifiable only to the extent that schooling is effective in promoting the realization of national objectives, attaining the Sustainable Development Goals (SDGs) and Education For All (EFA) by 2030.

“These targets are, happily, in harmony with the manifesto and the CHANGE agenda of our Party, the All Progressive Congress (APC).’’

Buhari said his administration was determined to turnaround the sector for the better, noting that already the government was making appreciable progress in this respect.

He, therefore, challenged participants of the retreat to come out with strategies that would address the challenges of basic and secondary education, teacher training and professional development; technical and vocational education.

“The summit must work to enhance quality in, and access to, higher education and other challenges in the sector that will debar us from attaining the SDGs and be among the top 20 economies in the world,’’

In his remarks, the Minister of Education, Malam Adamu Adamu, advocated declaration of state of emergency in education so as to achieve the desired goals in the sector.

He stressed the need to carry the universities and other tertiary institutions along while driving the nation’s national development objectives.

“Mr President, to achieve the desired change that education needs, there is need for improved funding and a measure of political will in national governance,’’ he said.

The Retreat, with the theme; “Education Sector in Nigeria Challenges and Prospects”, has Vice-President Yemi Osinbajo, cabinet ministers, Secretary to the Government of the Federation, Presidential aides, heads of agencies and parastatals under the Ministry of Education as participants. (NAN)