No fewer than 9,298 students of the University of Nigeria, Nsukka (UNN) in Enugu State would be conferred with various degrees during the 47th convocation of the university scheduled to hold on Dec.1. 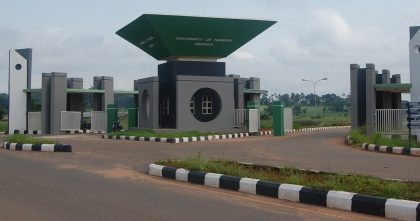 The Vice Chancellor of the UNN, Prof. Benjamin Ozurumba made the disclosure at the pre-convocation press briefing in Enugu on Monday.

Ozurumba gave the categories of the graduates to include 7,830 first degree, diploma and certificate including 132 first class graduates.

The vice chancellor said that three eminent Nigerians who had distinguished themselves in public service would be awarded honorary Doctorate Degrees.

Ozurumba disclosed that eight of its renowned professors would be conferred with the title of Professor Emeritus for their meritorious service to the university.

He said that the Governor of the Central Bank of Nigeria (CBN), Dr Godwin Emefiele would present the convocation lecture on Nov. 30.

“It is remarkable that the university is holding its 47th convocation barely 10 months after the 46th convocation held in February, this year.

“This is one of the results of our resolve to do the right thing and set a record of excellence in university administration,’’ he said.

The vice chancellor used the occasion to announce some achievements of the institution including revamping of its moribund agric-farms.

According to him, many of the farms are up and running leading to the production of cassava flour, poultry, fish, cash crops including improved variety of breadfruits in commercial quantities.

“Our consistent apex position in the Webo-metric ranking of Nigerian universities based on creative output has not been faulted.

“Our commitment to staff welfare has resulted to their prompt promotion including unprecedented number of professors ever promoted by a single administration in the history of our university,’’ he said.

Ozurumba said that the university was making progress because of the peace and love between the institution and various stakeholders as well as prudent management of available reources. (NAN)