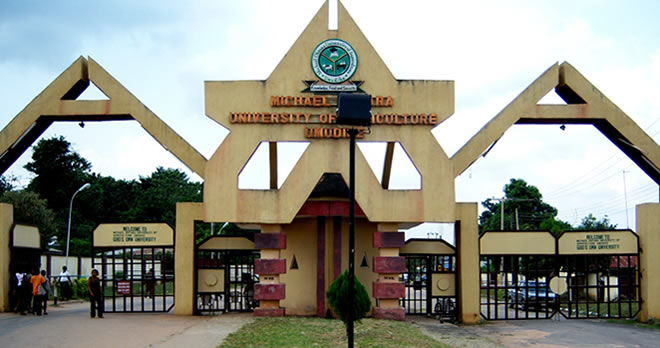 Students of  the College of Management Sciences (COLMAS) of Michael Okpara University of Agriculture, Umudike in Abia, on Thursday  protested against the Federal Government’s policy scrapping seven courses in the college.

The students protested to the office of the Dean of the college, Prof John Ihendinihu, and called on the management of the  university to initiate steps toward the restoration of the courses.

The President, Association of Management Science Students (AMSS) of the university, Mr Uzoma Onuoha, said that they were disturbed by the news of the scrapping of the courses.

Onuoha said that they were worried by the development and wanted to know what the management was doing about it.

“We appeal to you sir to ensure that something is done fast to restore the programmes.

“We can never be violent or engage in any act that would bring shame to the university as we continue to express our dissatisfaction with the policy,” he said.

The students carried placards, some of which read: “Restore our programme in JAMB brochure.

Responding, the dean said that the college with the university management was on top of the situation and hoped to get positive response from the relevant authority.

He urged the students to remain calm and peaceful.

Ihendinihu said that the Ministry of Agriculture and Rural Development came up with the policy to scrap non-agriculture  courses from the three universities of agriculture in Nigeria.

He alleged that the ministry had relaxed the policy in  FUNAM and FUNAAB and the affected courses restored in the current JAMB brochure for the two universities.

He said that the decision to relax the policy in the other  institutions and exclusion of MOUAU was discriminatory.

He said the university had set up a committee with three professors from the college as members to handle the issue.

Ihendinihu, who was flanked by heads of departments in the college, later told newsmen that the offering of management sciences did not breach the lawb that established the university.

He said the law “provides for a tripod mandate of teaching, research and extension in agriculture and related/allied disciplines.”

He appealed to the Minister of Agriculture and Rural Development, Chief Audu Ogbeh, to order the immediate restoration of the scrapped COLMAS programmes in MOUAU as done for the others.

He said that the college had 6,735 regular and 4,196 part-time students as well as 172 members of staff, whose fate was now uncertain because of the new policy.

The dean explained that the policy would further worsen the fate of Abia indigenes seeking university admission.

He said Abia was disadvantaged compared with other states  in terms of the distribution of Federal Government-owned tertiary educational institutions as MOUAU was the only one in the state. (NAN)