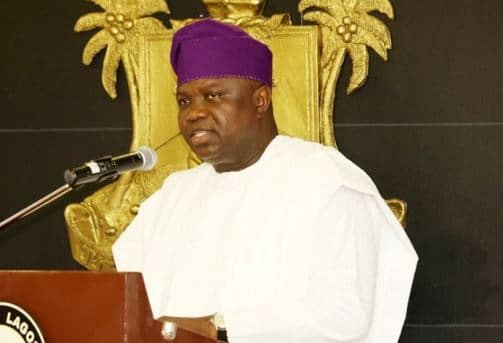 Lagos State Governor Akinwunmi Ambode says emphasis on Academic qualification, without considering adequate skills to deliver, contributes to the high level of unemployment in the country.

Ambode, who was represented by his Deputy, Dr Idiat Adebule, said this on Tuesday at the Grand Finale of the Science, Arts and Craft Exhibition and Talent Hunt by Junior and Senior Secondary Schools in the state to celebrate Lagos at 50.

He said that invention, entrepreneurship and the development of innate natural talents were the ways of achieving self-sustenance, job creation and turning around the nation’s economy from its present state.

”I am more convinced that the era of white collar jobs is gone forever. We must as a matter of urgency emphasise on home grown innovation and creativity instead of adopting anything foreign.

”I believe strongly that only we can find solutions to our peculiar collective challenges. It is time we joined industrial nations such as Japan, China and Singapore; and shed the toga of a consumer nation.

”We are having this exhibition as part of activities to celebrate Lagos at 50 to open minds to the immense economic opportunities in science, arts and crafts.

”This will motivate young minds like our students who are the leaders of tomorrow to develop and inject their creativity to develop the social and economic status of the state in the next decade, ” he said.

Ambode said that the state government would collaborate with the Bank of Industry to develop the best projects from the exhibition and mass produce them for the larger market.

He urged young Nigerians to write their names in the sands of time by inventing something to improve the lives of mankind.

In his remarks, Mr Adeyemi Odesina, Permanent Secretary, Ministry of Education, said the exhibition and talent hunt was aimed at redirecting young peoples’ exploitative thoughts to help discover and harness their innate talents.

”The  huge investment and commitment of the government to quality education, especially the provision of craft and science equipment in schools, is yielding positive results.

”I commend the students whose exhibitions made it to the grand finale from the different districts. We hope that the inventions by our students will be developed to solve the problems affecting humanity, ” he said.

The six education districts in the state held their Science, Arts and Craft Exhibition preliminaries on April 10 and 12.