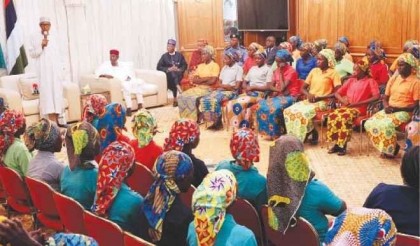 … ‘Why we concealed identity of their schools’- Shettima
… ‘Poor quality of Chibok girls education exposed my greatest concern’
… ‘Some private schools refused admitting Chibok girls- Dr Mandara
Forty two girls who escaped from Boko Haram after their abduction ‎at Government Secondary School, Chibok on April 14, 2014‎ have graduated from private schools in Plateau and Katsina States through a joint sponsorship ‎by the Borno State Government and a non-profit humanitarian organization, Girl Child Concern, chaired by Dr Mairo Mandara, a foremost advocate of girl-child education in Nigeria.
The girls were part of the 56 girls who escaped within days after the Boko Haram abducted 276 final year female students around midnight while the girls were writing the 2014 West African Senior Secondary School Certificate Examination. Some of the girls jumped out of moving truck while others fled from where the girls were detained in insurgent territories.
Governor Kashim Shettima attended a special graduation ceremony organized for the girls at A Class event Centre in Abuja on Tuesday morning. The event had in attendance, the 42 Chibok escapees and 34 other vulnerable girls exclusively sponsored by the Girl Child Concern with support from some humanitarian partners.
Chairperson of the Girl Child Concern, Dr Mairo Mandara recalled that after the escaped girls went through psycho-social rehabilitation in 2014, ‎Governor Shettima gave her a special task of taking over managing the education of the girls.
“Some of the schools we contacted all refused to admit the girls soon as we told them that they were the those that escaped after abduction in Chibok. The school authorities were afraid that Boko Haram could go after their schools. Some of them were concerned that parents of existing students were going to withdraw their children from their schools for fear of Boko Haram if they had the Chibok schoolgirls in their schools. Finally, we got two schools in Katsina and in Plateau States which accepted the girls. After the girls were evaluated,  they couldn’t compete with existing final year students so they had to go back to SS one to start their senior secondary education. We are glad that today, these girls have graduated from secondary school and have indicated their interests on future careers in tertiary institutions” Dr Mandara said.
‎The girls were enrolled at Bethel International Christian Academy and Ulul-Albab Science Secondary School, Katsina for those who are Christians and Muslims respectively.
Governor Kashim Shettima said at the occasion that the Chibok abduction had exposed the poor standard of public school education in Borno State which was his greatest concern.
‎”One other painful aspect of the Chibok abduction tragedy, was that it exposed my greatest concern, which is the poor quality of our public schools. Since 2014, my priority has always been about the rescue of all our abducted  girls but then, we saw some of them granting interviews in local languages due to problems of expression in English and it was not the fault of the girls. That was the quality of education they were provided. I live with a huge embarrassment concerning the quality of education provided by public schools in Borno State as it is case in many other States. I do not intend to make excuses but as those familiar with what I met on ground would corroborate, I inherited a disaster in the name of basic education. The situation was so bad that the amount of money being allocated for feeding boarding students across all secondary schools in Borno State was a paltry N20m per month which amounted to less than five naira per meal for a student. Of course, we have since addressed that in 2012 by jerking up the allocation from N20m to N100m per month. We are drastically repositioning our educational system with focus on totally changing basic education which is the most important step in the education of any child‎” Governor Shettima said.
The ‎Governor also explained while being interviewed by journalists that a decision was reached on the request of Dr Mandara that the identity of the two schools which admitted the escaped girls be concealed mainly to prevent media publicity that could attract Boko Haram or cause traffic of journalists who may seek to interview the girls and in the process interfere with their education.
“I actually asked Dr Mandara not to even tell me the schools the girls were attending. I used to even speak with the girls and their principals on phone but I never asked to know their schools until today that we are gathered for their graduation” Shettima said.
Most of the girls are said to have obtained credits after writing the 2017 May/June WASSCE which makes them eligible for admission into tertiary schools. Governor Shettima has promised to sit Dr Mandara and the girls to discuss their future, promising huge support from Borno State Government.
Highlights of the graduation ceremony were ‎series of drama, songs and presentation of poems by the graduands with prizes presented to those with the best moral and academic records based on assessments by the two schools.