The Federal Government has approved an ICT academy in schools within the six geo-political zones of the country to fast track the innovations of students. 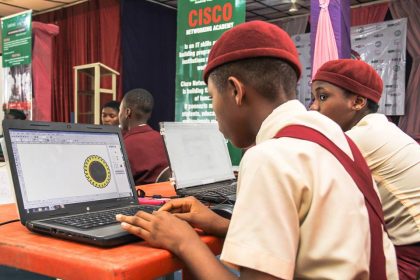 The Minister of Education, Malam Adamu Adamu, said this at the inauguration of the UNITeS CISCO Internet of Things (IoT) Networking Academy at the Federal Government Girls College, Bwari on Friday.

Represented by the Permanent Secretary in the ministry, Mr Sonny Echono, the minister said as part of the initiative to fast track ICT innovations among children, the gesture was apt as it would help transfer knowledge for the future endeavours of the students.
The IoT is the inter-networking of physical devices, vehicles (also referred to as ‘connected devices’ and ‘smart devices’), building, and other items embedded with electronic, software and network connectivity.
It is an ever growing network of physical objects with IP address for internet connectivity, and communication that occurs between them and other internet enabled devices.
Adamu said that the gesture was also aimed at promoting the development of ICT in education through transfer of knowledge.
“As part of the ministry’s initiative to develop talents, it has approved the establishment of UNITeS Cisco Academy in the six geo-political zones of the country.
“The facility would also be located at the Federal Government Girls College (FGGC), Bwari; Queens College, Lagos; Federal Government College (FGC), Enugu; FGC Bauchi; FGC Benin, and FGC Kano,” he said.

The minister said the initiative had also been approved in all federal unity colleges across the country.
He added that these centres would serve as a hub for open innovation to showcase talents and skills of the children.
He said it would also offer an infinite possibility for the children’s future endeavours.

He appealed to the students to begin to think of useful ways of engaging in internet productively rather than involving in criminal act through the internet.

He said that doing this would help the children use the technology to achieve the human development of the country.
Earlier, the Principal, FGGC Bwari, Mrs Stella Omu, said the centre would afford the opportunity for young minds to become professionals outside their future choices of study.
Omu said that it would also leverage on the unique knowledge and experiences from IOT and getting connected to make lives better and society more developed.

Mr Toyin Olatayo, the Cisco Academy Support Contact, said the centre if properly harnessed, would transform the school into a smart school teaching and learning.

Olatayo stressed that the academy had made arrangement to establish the network of IoT innovation centres in secondary schools and universities across the country.
He called for partnership to help enhance innovative solutions in the country. (NAN)