A coalition of civil society organizations have taken the campaign on Freedom of Information (FOI) Act to the University of Abuja, to create more awareness among the students on its accessibility and implementation. 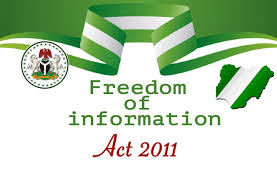 Mr Chambers Umezulike, Senior Programme Manager, Connected Development (CODE) at the “Freedom of Information Dialogue on Wednesday in Gwagwalada, said the idea was to sensitise the students to the act and how they could leverage on it to make government accountable.

According to Umezulike, as law students, they should know about the FOI act and how they can use it to facilitate development in their individual life endeavour.

” The coalition aimed at sensitising the law students to the FOI act and how they can leverage on it as citizens to be able to demand accountability and transparency from the government for development facilitation.

“Even as citizens now, they can write to the government institutions asking for information about projects being implemented in their various localities and follow up with the processes to ensure they get information needed,” he said.

He noted that the knowledge of the act was very crucial for the students’ career.

Umezulike also applauded the Federal Government for being committed to the implementation of the act, while expressing dissatisfaction with the level of FOI awareness at states level.

“At the states level, most of the government institutions, including the local government level, are not aware of the FOI act.

” And even when they are aware they don’t respect that law; some of them were even saying that FOI is not domesticated in their states,” he added.

Also, Prof. Danfulani Ahmed, Faculty of Law, University of Abuja, suggested that the campaign should be extended to primary and secondary schools as well as other private institutions.

According to him, it is from that level that the act will be very meaningful; so that awareness on the act should not be limited to universities.

Ahmed observed that sometimes simple things would not get down to the common man on the street due to some circumstances beyond control.

“But the more people are informed, the more they have greater acknowledgement of what is happening politically within their right.

” It is important that FOI gives opportunity to virtually every citizen to demand the relevance of governors and contributions to the citizenry.

“We need more public information and greater access on the act,” he said.

Earlier in her presentation, Ms Ene Nwankpa from Right to Know, Nigeria, a civil society organization, said that FOI act was a tool which empowered the citizens to demand for transparency of the government.

Nwankpa, who spoke on the theme: “The role of the Freedom of Information Act in promoting Transparency and Accountability towards ensuring the achievement of the SDGs by 2030”, urged the students to start to access information through the act.

She noted that “it is the right of the citizens to follow up information on the extent of development in their communities.

The News Agency of Nigeria (NAN) reports that the coalition of the organizations include Connected Development, Right to Know, Nigeria; University of Abuja Law Clinic and Faculty of Law of the university.(NAN)

NEWER POST‘The Igbo In The Politics of Nigeria’ – Rotimi Amaechi
OLDER POSTJUST IN: NHRC’s Report On Electoral Impunity Out Next Week