Parents of abducted Dapchi schoolgirls in Yobe, on Tuesday, lauded President Muhammadu Buhari for considering the option of negotiation against use of military force to rescue the girls. 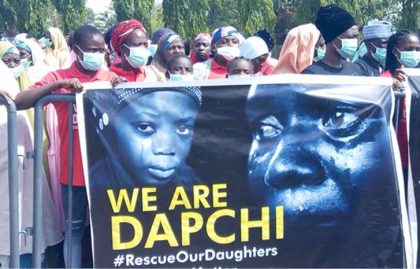 The parents, who spoke separately to News Agency of Nigeria (NAN) in Damaturu, said the option gave them hope for safe return of the girls.

Alhaji Bashir Manzo, chairman, parents association of the abducted schoolgirls, said “this is a welcome development and we are happy about it.

“Use of force, as the only option, will result in death of many of the girls while negotiation provides for their safe return.”

The chairman, who encouraged government to go for dialogue to hasten return of the girls, said “the fact that the insurgents provide room for negotiation gives us hope for safe return of our daughters.”

“Government should deploy resources at its disposal to take this advantage and ensure safe return of the girls” he said.

Alhaji Ali Mohammed, a father of eight of the students, described negotiation as the only safe option for the insurgents to release the girls, saying he was happy “government has considered this option of negotiation”.

Maryam Alkali, a mother, said every mother would appreciate the option that will bring the girls back home safely.

“Let me state without fear of contradiction that every mother of the abducted girls will now have a strong hope for reunion with these girls” she said.

Malam Mustapha Imam, another parent, said “If government had resorted to military option alone, it may jeopardize the safety of the girls, so the option of negotiation is a welcome development.”

He however called on government to take strong precautionary measures in safeguarding every school in the country, especially those in the Northeast.

“Government has to invest heavily on security, especially in equipment, manpower and intelligence gathering for improved security,” Imam said.

NAN reports that the President on Monday, while receiving US Secretary of State, Rex Tillerson, said the federal government had considered the option of negotiation to rescue the abducted students.(NAN)