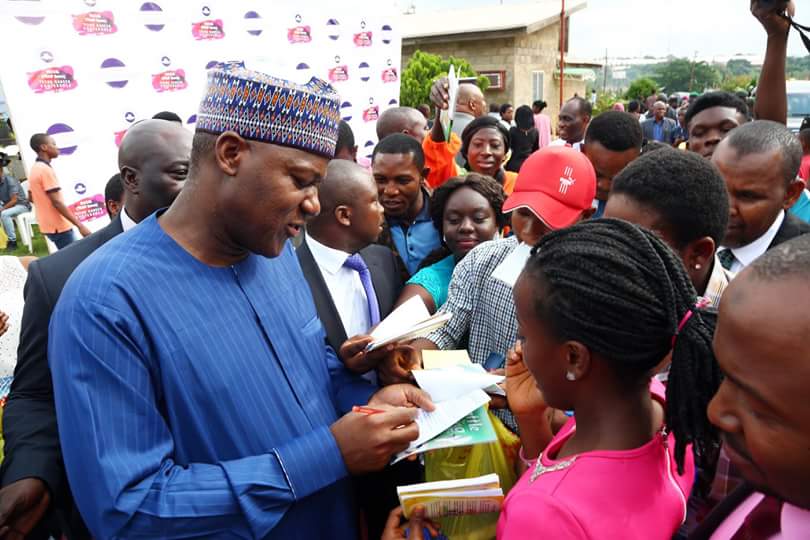 Turaki Hassan, Abuja: Speaker of the House of Representatives, Rt. Hon. Yakubu Dogara, has said that in order to effectively combat unemployment in Nigeria, a different approach which focuses on self-discovery must be taken in educating young Nigerians.

He said this on Saturday while addressing teenagers at the 2018 Teens Career Conference organised by The Redeemed Christian Church of God in Abuja.

He stressed the importance of self-discovery to attaining success and fulfilment in their chosen career paths, saying, “Education fundamentally is very good, but education and success are not synonymous. If that was the case, every educated person would be successful, but that’s not the case. They are a lot of educated people out there that are hooked unto careers that are not giving them much in terms of success and happiness.

“Now unfortunately for us our educational system in this country, the one we inherited from our colonial masters is not tailored towards self-discovery, it cannot tell us who we are. It is tailored to enable you fit in the context of finding out what you want to do, go to work, close from work, earn salaries, raise a family, then you become a pensioner till you die. That is the tragedy of our educational system.”

Going further, he also spoke on the need to modify the system in such a way that young people are trained with emphasis on providing jobs, and highlighted the role the Church must play in bringing about the required change.

“We have to change the narrative in this country, where instead of training employees, we are training leaders, because we have come to the time whereby government cannot continue to provide employment for our teeming populace in this country. We need to adapt as it’s done globally, to become entrepreneurs, those that will establish businesses that will employ 50, 100 people, and when we have that, unemployment will be a thing of the past.”

“When we just go to school to become medical doctors in government hospitals or any profession working in government agencies and parastatals, the government would be saturated and at the end of the day we will run into very dangerous economic crises of unemployment in this country, so we are raising people that will generate jobs, not people that will seek for jobs, and if we have to do this successfully, we have to begin from the Church.”

“I want to tell you as young people that each of you is gifted, God has not created anything that is useless. Whatever God has created, he has a purpose for. You have your purpose so that you can use that and accomplish something here on Earth. The truth however is that very few people discover their mission here in life, even though they are educated and seem to have careers, but they are not happy within themselves. They will also not be able to invest that talent that God has put in them for the development of their community. So the challenge is to look deep into ourselves, into the Scriptures and see what God says about us, about the gift that we have in us that we can flourish, develop and master. So that the moment you release it, the entire world will look to you.

“I can boldly tell you that in doing this, there are certain ground rules, first of all you have to have vision. The Bible says without vision, the people pass on astray, which means if you lack vision you’ll not have self-control. You see vision is everything, because if you know where you are going to, you’ll know exactly the roads that would lead you to that place, and you’ll know the roads that won’t lead you there. You’ll know exactly what you need to do in order to get there, and you’ll know what not to do, so that you’re not distracted. So vision is quite important, and when you have that vision, you need to discover that gift that is in you, based on God’s written word or based on revelation. The talent may be hidden, but with revelation, to reveal something means the thing was there before, but just hidden, and had to be unveiled. Each of us have these talents, we just have to go to God in prayer and study His Word so that we can unveil this gift and build a vision around it. So vision is first and key, without vision there won’t be self-discipline.”

Citing examples with biblical figures such as Joseph and Elijah, compared with Samson, he further urged the teenagers to be of strong character.

“Character means that you cannot be separated from your word. As a matter of fact, if you don’t have character, you can never be effective. Once you cannot be separated from your word, it means that you have character. Character is key, character is more important than power, influence and skill. If you doubt what I’m saying you can compare Elijah or Joseph in the Bible with Samson who was a very powerful man. All of us admired the story of Samson and what he could do with his power, but look at Joseph, it wasn’t a case of power, he was faced with temptation and even ran away from the woman. But at the end of the day look at where the character brought him into, a world of prominence; character brought him to the throne. While Samson with all his powers, because he had no character, look at how he ended, with even his eyes plucked out. So, character will take you to your throne, while lack of character as was the case with Samson, will lead one to destruction. So character is key.”

Speaking on self-doubt, the Speaker made reference to biblical figures such as Moses, Gideon, David and Jeremiah, who God used to bring about tremendous change in their societies despite the doubt that initially overwhelmed them.

He also made reference to the life of Jesus Christ, who made tremendous impact despite being on earth for just 33 years, and urged the youths to be disciplined and to use their time and technology productively.

“Moses was raised in the palace of a king and Moses after he did what he did, ran to a place called Median and became a Shepherd. While he was still tending to sheep, God called him and introduced him to himself. And said you’ll have to go to pharaoh and lead my people out of captivity in Egypt. Look at what Moses thought of himself, a stammerer who was going to face the most powerful king of that time. It was the labour of Moses’ people that made pharaoh that powerful and God said you’re the one, the stammerer. You’ll approach this king and free my people. Moses said who am I to approach pharaoh? But God insisted he was the one to do the job.”

“Let’s now move to Gideon, in the book of Judges you’ll encounter the story of Gideon, who was hiding from the Medianites who had dominated the nation of Israel as at that time. The Angel of the Lord appeared unto him and said The Lord is with thee thou mighty man of valor. And Gideon thought to himself if truly The Lord is with us why would these things be happening to us? He was questioning God and he even gave excuses and said I’m the least in my Father’s house which is the least of our tribe, completely disqualifying himself. But God said you’re the one that would free my people from Median. Gideon didn’t even believe God, he had to ask for signs, and to some extent God had mercy on his unbelief, and gave the signs before he took up the challenge.”

“Look at the life of David for instance, a young man unworthy of the benefits of the house, so much that when the Prophet came to anoint one of the sons of Jesse to be King, they didn’t even see the need to invite him, he was just a youngster like some of us here. In the scriptures we read about the character of David even as a teen it was so inspiring that I cannot recount how many times I read his story because it gave me inspiration as a young man. God will always stay committed to His purpose in His children’s lives even when we see little in ourselves. Remember what the king asked, whose son is this? Even Goliath himself asked am I a dog that you send this to me? But look at what David accomplished.”

“Look at the case of Jeremiah, Jeremiah was timid and couldn’t speak, and he let God know this. What am I trying to drive at? If God were to introduce you to yourself, most of you would not agree with Him because we are not any better than any of the Fathers of Faith aforementioned. That is however the beginning of our greatness. So when God calls you and tells you who you truly are, your background and family history doesn’t matter. Whatever it is that you think is holding you back doesn’t matter. What matters is that God has called and told me who I am.”