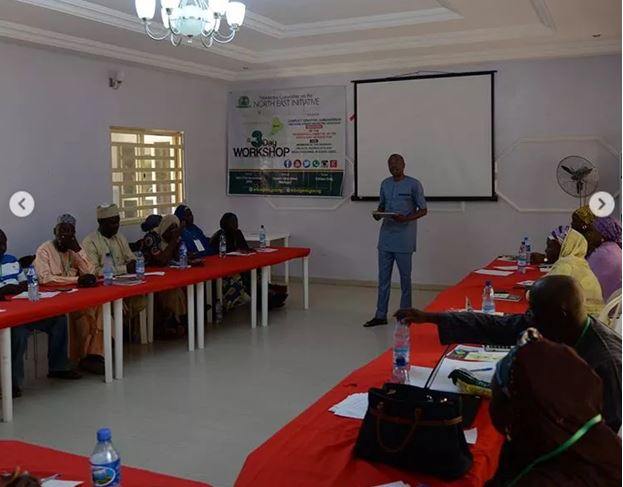 At a three-day workshop organised for journalists in Borno state, the committee urged journalists to strike a balance in their reportage of conflict and development/ humanitarian issues as well as pay more attention to gender and be diverse in their reportage to give voice to the vulnerable and marginalized population in the communities.

The workshop which had facilitators including Professor Lai Oso, Dr Wilson reiterated the need for journalists to report conflict issues with a lot of understanding of the context they are reporting while adopting the skills of sensitivity to religion, ethnicity and other social issues.

In a communique issued at the end of the workshop, the participants agreed that; “Government, security agencies and journalists should see themselves as partners in national development. Create synergy especially during the reconstruction period, Nigerian union of journalist (NUJ) should regularly collaborate with Security Agencies, Donor Organizations, INGO’s and other humanitarian actors to promote a common understanding of conflict and peacebuilding situations.

Journalists should consider the use of images to tell their stories, and also popularize the positive side of the North East situation.” The participants including journalists who report from conflict areas were also urged to always integrate the use and the opportunities with social media in their work especially during breaking news, fact checking and following up stories.

The journalists collectively called for support from the international donor agencies, private organizations and government institutions to assist them with more training on safety, trauma and psychosocial support to strengthen their work in the North East.

The journalists also revealed that they themselves have been victims of the insurgents as some of their colleagues have died while some were threatened by the insurgents and had to relocate to other parts of the country.

At the end of the workshop, the Borno State NUJ and other participants thanked the PCNI on its support of journalists and for putting together the three-day workshop.