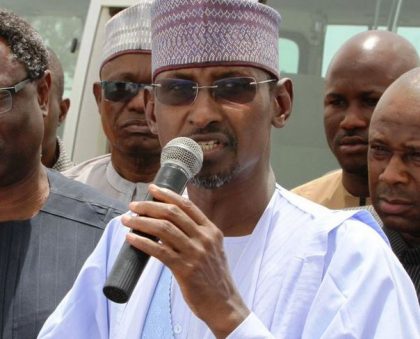 Speaking during the inauguration in Abuja, Azonobi said he took it upon himself to ensure there was a befitting convenience for the students, especially the females.

Azonobi, an alumnus of GSS Tudunwada class of ’97, added that the passion to build the toilets came when he visited the school to see some of the challenges of the school.

According to him, I became a student of this school in 1991 and graduated 1997. I visited the school and I saw so many things were not right.

“The major challenge I saw in the environment was toilet and I find out there is no single toilet in the school and for a population of about 1000 plus student, it became worrisome.

‘I took it upon myself and discuss with my set and they gave the permission to go ahead with the project. It was not easy to carry out the project as I am just a private worker and not in the government sector.

Azonobi advised the school to allow investors to come into the school to invest as it was in the heart of Abuja, urging them to also revive back public schools in the FCT.

He said “because the inability of government schools being revived makes private schools look like the solution.

“Private school isn’t the solution but public schools itself. I want to advise the government to invest more money on education and the welfare of the students like what we are doing today,” he said.

The Executive chairman, Secondary Education Board (SEB), Mr Yahaya Muhammad, commended the efforts of the Domak Global Foundation Chairman, and the entire 1997 set for the project.

Muhammad said that the FCT was a mini Nigeria as well as the schools in the territory, emphasising that no organisation or government institutions brought Nigerians together like the school settings.

“We thank the FCT minister whose vision has brought this transformation we are seeing now in the FCT schools.

“By and large, the issues of conveniences in our schools are indeed a very challenging situation. Today our brother, a product of this school has decided to give us this structure.

“Infact, I couldn’t help but to forward the structure to the Minister who directed immediately that the commendation letter be sent to you,” he said.

The Principal, GSS Tudunwada, Mr Akor Sunday, said that the project was a big one he had been looking forward to unveiling.

According to him, this convenience has been given back to school and it is our prayer to keep it in good use of the environment.

“And at the same time, we are looking forward to our alumni that at all times, let them come back and do something for the school most especially the school hall.

“The School Hall does not represent the beauty of the school at all. I appreciate the board chairman, the Domak Global Foundation and the entire 1997 set,” he said. (NAN)