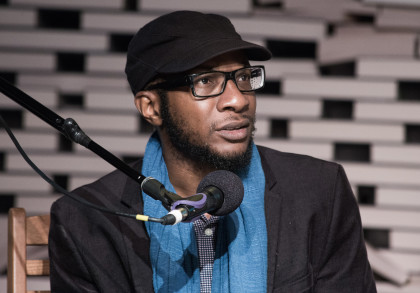 Teju Cole
curator of One Night in Lasgidi

Whether it is his 10-track listening tour of Mali—curated 2-years ago during the Northern Mali conflict—or a provocative mix imagining what a soundtrack for global terror might sound like, Nigerian-American writer–Teju Cole–is fond of using music as a tool to tell stories about places and their people.

Yesterday, the African music, fashion and culture site–Okay Africa–released a playlist curated by Teju Cole recounting a fictional night out in Lagos. Titled One night in Lasgidi, the playlist features popular Nigerian artists like D’banj, Davido, Burna Boy and Asa. It also features Ghanaian artists like Sarkodie. The playlist is accompanied by a short essay from Cole describing the varied music styles–from Afrobeats, house, hip-hop, dancehall and pop–that are part of the pleasures of his fictional night out in Lagos.

In the short essay, Cole reflects on how contemporary Nigerian dance music has gained global appeal in recent times. With a music industry that produces over 550 albums of different kinds of music annually–as reported by CNBC Africa earlier this year–Nigeria’s music industry is on an upward trajectory. It is expected that the country’s entertainment industry could hit $1 billion by 2016.

“I think many people still have an idea of “African music” that’s quite different from what a lot of African people are actually listening to. My Lagos playlist is about the new Nigerian music. The music telegraphs, more efficiently than words ever could, the irrepressible cosmopolitanism, energy, and joy of young Nigerians. Not laid back, not relaxing. Effervescence as a weapon against despair.”

Cole, award-winning author of two novels, Open City and Everyday is for a Thief, has made his mark as a perceptive writer on wide-ranging issues often using innovative ways to tell stories–including orchestrating his followers into co-writing a 33-tweet story on Twitter titled Hafiz.

“Day is for thought, and night for clubs. Night I’ve spent in clubs in at least a couple dozen cities by now, in as many countries. American hip-hop generally rules the scene, chart toppers mostly. A surprising number of DJs, from Stockholm to Cape Town, know their old-school selections. But in the past few years, contemporary Nigerian dance music, Naija jams, have been taken in by enthusiastic audiences at out of the way clubs in the U.S., huge crowds in East African stadiums, and on mainstream radio play in the UK.”  -Teju Cole

Teju Cole is the author of Open City and Every Day Is for the Thief.