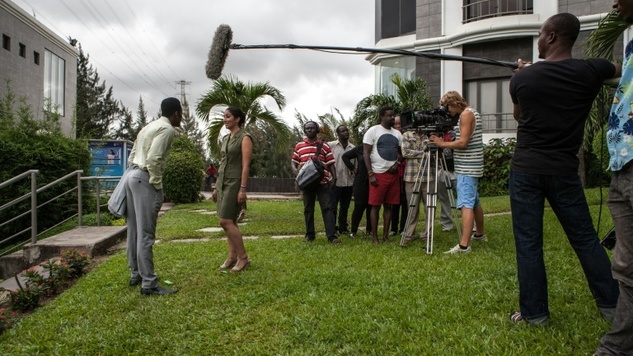 The Nigerian film industry is second only to India’s Bollywood in terms of the number of films produced, which is estimated at around 200 a month, according to an entertainment and media report by PricewaterhouseCoopers for 2014-2018.

“Our stories are original. That’s what makes us stand out,” said Omoni Oboli.

In 2014, the Nigerian government estimated that Nollywood was a $3.3bn industry, with 1,844 movies produced in 2013, Fortune magazine reported. The industry brings in $600m to the Nigerian economy annually, according to 2014 figures put out by the US International Trade Commission.

To date, Nigerian films have been cheap to produce and shoots generally last less than a month. “This enables a quick financial turnaround: A movie can be profitable within two to three weeks of release,” the PwC report stated.

But most Nigerian films are watched on DVD and pirating is widespread: Nine pirated copies of a film are sold for every legitimate one, according to the World Bank.

According to Nigerian actress Genevieve Nnaji, who starred in 2013’s Half of a Yellow Sun, the higher production values of recent Nigerian films demonstrate that Nollywood is ready for greater international collaborations.

“We need to invite more audience. We need to be more open with even our storylines and with collaborations. Right now, that’s kind of the focus, which is why we’re glad we’re here,” she told Al Jazeera at the festival.

Tapping into where the cinemas are is also important to build an audience, the actress said.

Despite having a population of more than 180 million people, Nigeria lacks cinemas: The filmmakers and producers at TIFF put the number of cinemas across Nigeria at 29, meaning the country has a total of only about 100 screens.

Nigerian filmmakers, producers and actors are hoping a spotlight on Lagos at this year’s Toronto International Film Festival (TIFF) will open Nollywood up to the world.

"Movie-goers in Nigeria would see a Hollywood film first before they see a Nollywood film." How @OmoniOboli sells Nollywood to Nigerians. pic.twitter.com/IyqGXJGuOc

But equally important, the filmmakers say, is maintaining the originality and fresh storytelling that has made the well-established Nigerian film industry such a national and regional success over the past two decades.

“Our stories are original. That’s what makes us stand out,” said Omoni Oboli, the filmmaker, producer and actress, whose movie Okafor’s Law had its world premiere at the festival this year.

“I feel like the audiences are bored. Hollywood is churning out the same thing over and over again … We have fresh stories. It’s original,” Oboli said at a press conference in Toronto. “If they’re bored, they should look to us – look to Nollywood.”

According to Niyi Akinmolayan, director of The Arbitration, it is less about seeking validation from the United States or Hollywood, and more so wanting “to make films good enough for anyone anywhere to watch our movies”.

Oboli’s film is among eight Nigerian features being screened as part of the festival’s annual City-to-City programme, which shines a light on filmmaking in cities around the world. In previous years, this section has shone a light on Seoul, London, Athens, Mumbai, and Istanbul, among other places.

Many in the industry wonder if Nigerian filmmakers should really be focused on appealing to an international audience, rather than making better films to satisfy their already expansive fan base.

According to Niyi Akinmolayan, director of The Arbitration, it is less about seeking validation from the United States or Hollywood, and more so wanting “to make films good enough for anyone anywhere to watch our movies”.

“And, hopefully, we’ll get some recognition,” he said.

The Arbitration is largely set in a meeting room in Lagos, where a woman has accused a Nigerian IT company’s chief executive – her former lover and boss – of rape. Though the film is partly a peak into the growing Nigerian hi-tech industry, its main themes – sexual harassment, power dynamics, and gender roles – are universal.

“I felt this is a perfect opportunity to polarise the audience and make them ask important questions. And in this case, we’re defining sexual harassment, we’re defining rape, we’re defining the place of a woman in society … I always feel there’s a lot of beauty and truth when you get people to ask questions,” Akinmolayan said.

According to film festival’s artistic director, Bailey, a desire to reach global audiences while also maintaining the distinctive style that appeals to people at home is something that has been witnessed in the film industries of South Korea, China, India and even France in recent years.

“I think Nigeria can do both,” Bailey said. “Not everybody working in Nollywood is going to want, for instance, to try to set up a co-production with an American company or a European company, but some will. And I think the ones that will, will do well with it.”