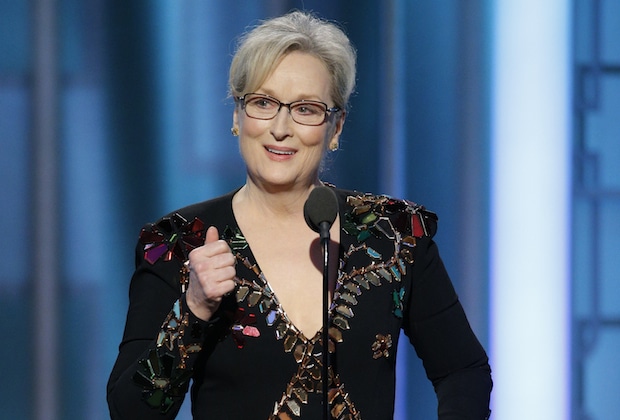 Meryl Streep Called Out Trump, He Responded “Over Rated.”

The most rated Oscar-winning award actress Meryl Streep is one of the most esteemed stars of the screen in Hollywood.

At the Golden Globes, the actress used the time allotted to her to reflect on the action of US President-Elect, Donald Trump even though she didn’t call him by name.

Streep said “There was one performance this year that stunned me,” she said. “It sank its hooks in my heart. Not because it was good. There was nothing good about it. But it was effective, and it did its job. It made its intended audience laugh and show their teeth.

“It was that moment when the person asking to sit in the most respected seat in our country imitated a disabled reporter. Someone he outranked in privilege, power, and the capacity to fight back. It kind of broke my heart when I saw it. I still can’t get it out of my head because it wasn’t in a movie. It was real life.”

“And this instinct to humiliate, when it’s modeled by someone on the public platform, by someone powerful, it filters down into everybody’s life because it kind of gives permission for other people to do the same thing,” the actress said.

The Washington Post reports Trump responded in a brief interview with the New York Times shortly after the Golden Globes aired.

Trump told the Times he had not seen the speech, but he dismissed Streep as “a Hillary lover” and said that he was “not surprised” to be attacked by “liberal movie people.”

On Monday, Trump added that Streep’s attack was unfounded, writing: “For the 100th time, I never ‘mocked’ a disabled reporter (would never do that) but simply showed him ‘groveling’ when he totally changed a 16 year old story that he had written in order to make me look bad. Just more very dishonest media!”

Streep was born on June 22, 1949, in Summit, New Jersey. She began her career on the New York stage in the late 1960s and appeared in several Broadway productions. She began appearing in films in the 1970s.