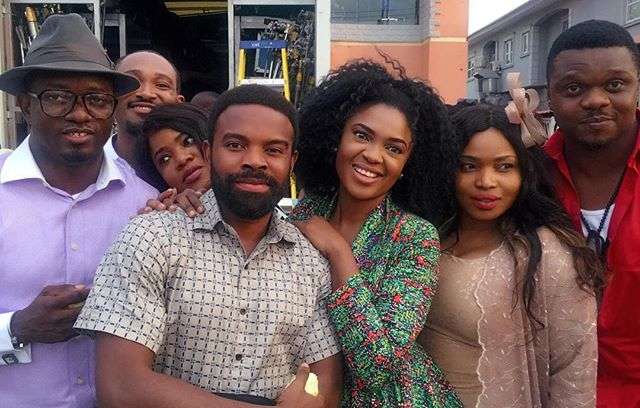 The social media is agog as commentators describe Omoni Oboli as making history following the amazing success of the movie, “Okafor’s law” which debut on March 31.

This is an indication that the movie continued to sustain its No. 1 position in the industry.

The tickets of romantic comedy movie have consistently sold out every day at different times in different cinemas across the country.

People, in large numbers, have been flooding the cinemas daily to watch the latest Nollywood flick and they have all come out with smiles and good testimonies concerning the movie.

Lanre Yusuf‏’s tweet directed at women: “ Dear women, Most men belief in what we term ‘Okafor’s Law’ hence, be wary of your ex who gets all sweet with you. Signed”

Reacting to the turnouts of fans, Producer and Director of Okafor’s law, Omoni Oboli said “Actors in Okafor’s law have been visiting the cinemas at different locations.

“We have all been surprised at the reception from fans all over the country.

“ Truth be told, the tickets have been sold out everywhere we went, and we just want this to continue for as long as possible. I am grateful to God for His blessings.”

The movie had previously been premiered at the Toronto International Film Festival 2016.

It has been screened in several international film festivals, including the recent Pan African Film Festival.

‘Okafor’s Law’ which is named after a sexist theory is a movie with social consciousness.

It follows the story of a slick serial seducer, Chuks (Blossom Chukwujekwu), nicknamed Terminator, an “ardent player” who believes that once a man has been with a woman, he forever has access to her.

He was challenged by his friends to see if he could prove the universality of that stupid theory with three ex-girlfriends Ify (Ufuoma McDermott), Tomi (Toyin Abraham) and Ejiro (Omoni Oboli), whose lives have drastically changed.

This challenge of their various new statuses makes his quest to win the bet more and more insurmountable as he tries to prove the immortality of the long age law: Okafor’s Law.

Oboli also reacted and tweeted: “ It’s been grace all the way! #OkaforsLaw sold out in all cinemas across Nigeria.”