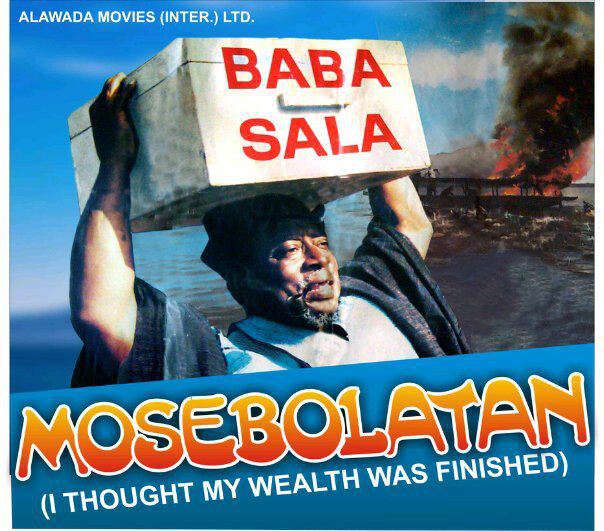 They told the News Agency of Nigeria (NAN) in Lagos that the late veteran’s death would create a huge vacuum in the entertainment industry.

“Baba Sala’s son, Emmanuel Adejumo, popularly called “Boisala’’ the Performing Officer at the National Troupe of Nigeria (NTN) had confirmed the death of his father.

Emmanuel said that the doyen in the entertainment industry died in Ilesa, his home town, on Sunday evening and that his body had been deposited at the Obafemi Awolowo University (OAU) Teaching Hospital Complex Annex, (Wesley Guild Hospital) in Ilesa.

NAN reports that Baba Sala was aged 82 having been born in 1936.

Segun Akiremi, popularly known “Kanran” described the late “Baba Sala’’ as a motivator, humble and a faithful servant of God.

He said that the history of African comedy would not be complete without mentioning “Baba Sala’’ as the pioneer of the comedy industry.

According to him, it is a celebration of a life well spent as he passed on in his 80s.

“ This is a painful news but we give glory to God for a life well spent because his prowess in the entertainment industry has robbed off positively on everyone in the Nigerian theatre and comedy world.

“It is a celebration of life for me because he has made impactful landmarks.

“ He was someone you could not differentiate his mood between when he was angry or happy while alive because he was always exhuming positive dispositions then.

“ He was a total comedian in drama, music, and acting and I don’t think this endowment in him could be replaced,” he said.

Akiremi urged contemporary comedians to study the late veteran’s cinemas and programmes in order to improve on their works.

“ I enjoin all comedians to go through his works to improve on their works of art because I know some comedians whose crack jokes do not propel one to laugh.

“We will all miss him greatly and I pray his loving soul rests in perfect peace,” he said.

Another actor, Jide Kosoko said that hospitable and accommodating traits were some of the good virtues he would continue to admire in the late “Baba Sala’’.

He said “Baba Sala’’ accommodated both the young and the old, males and female like the late Hubert Ogunde, and a host of his contemporaries during his life.

According to him, the late veteran successfully groomed many artists in the entertainment industry which he would be remembered for.

He added that “Baba Sala’’ ‘s efforts at grooming the Nigerian comedy industry would not be forgotten in a hurry.

” “Baba Sala’’ was a nice man, accommodating and peaceful, a true leader. He came, fought, and conquered.

“He was always with us at our various association meetings even at that old age. There is no way we can ever forget him.

“I condole with his family and pray his soul rests in peace,” he said.

“My sweet daddy has finally taken a bow. May your gentle soul rest in peace.

“ “Baba‘’ has died. His remains had been taken to the morgue. He died of old-age-related sickness.

“ “Baba’’ has gone to be with the Lord and he will be missed by many people including his fans,’’ he said.

Also, Mike Anyanwu, the Director of Legal Adviser, National Troupe of Nigeria (NTN), said that the late “Baba Sala’’ left indelible pages in the History of the Nigerian Theatre.

“Great exit. May his gentle soul rest in perfect peace,’’ he said.

A musician, Ishmael Lawal popularly known as “Fireman’’ told NAN that the king; legendary had gone.

“May he rest in peace.

“God bless you for adding value to our world of entertainment. May you continue to rest in peace.

“I was a young boy then and we used to rush to go and watch him on television, during comedy time,’’ he said.

Temitope Babayemi, The Vice-President (South West), Guild of Nigerian Actors (GNA) said that late Adejumo was a living legend and the King of Nigerian Comedy.

“Baba Sala’’ has gone to rest. May his soul rest in perfect peace! It is our prayers for him.

“Our thoughts are with Adejumo Emmanuel “Boisala’’ and members of the Adejumo family at this time for them to bear the loss,’’ he said.

An actor, Tony Okuyeme, said that “Baba Sala’’ and others alike made comedy interesting in their time and they started the comedy industry when there was no money in the industry.

“They had the passion for what they were doing, and still he was able to move about with his traveling troupe and still lived well with it.

“He was a good man and his children took care of him. May he rest in peace,’’ he said.

A poet and a script-writer, Victor Negro, said, “Rest in peace, great actor and comedian.

“It was tough during their time to do what he did, but he did it well,’’ he said.

It would be recalled that with the creation of the first television station in Nigeria: the Western Nigeria Television, WNTV, Baba Sala’s career became a household name.

He established the “Alawada’’ Series on WNTV and later NTA Ibadan every Wednesday between 7:00 p.m. and 7:30 p.m.