Justice Daniel Longji of a Jos State High Court on Thursday apologized to lawyers over lack of functional toilet facilities it the Jos High Court premise. 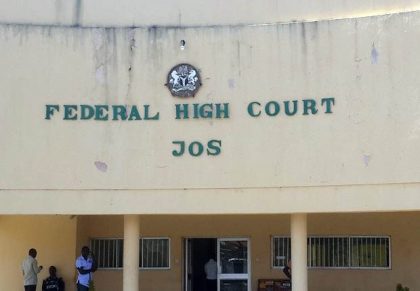 The Judge, apologized to Mr. Rotimi Jacobs (SAN), the EFCC Prosecuting Counsel in Sen. Jonah Jang’s N6.3 billion fraud case, pleaded with the Bar to help the Judiciary in the mess it has found itself in.

The News Agency of Nigeria (NAN) reports that the Jang case was on when the judge suggested a 20 minutes stand down to enable people who want to visit the restrooms to do so.

Jacobs had agreed with the judge but Longji told him there were no functional restrooms in the court premises.

“I have to apologize to you over the none availability of a functional toilet facility in the whole of this High Court premises. The situation here is this bad.

“You on the Bar must come to the assistance of the judiciary considering the situation it has found itself in this time around.

“I can’t imagine that in the whole of this premise, there is no single functional toilet facility that could cater for the people coming here for ligations,” Longji lamented.

Responding, Chief Mike Ezekhome (SAN), Counsel to Jang, assured the Judge of the Bar’s readiness to assist in the area of raising the matter with the authorities.

“Sir, we at the Bar are always fighting for you, particularly my very self, I will not stop fighting for the judiciary. For a whole High Court like this to be without a functional toilet facility is very unfortunate.

“We shall as lawyers take this matter seriously to stop the embarrassment and the inconveniences being caused litigants that troop in here for one thing or the other, ’’ Ezekhome assured.

“I did a lot of write-ups and carried out some crusades in my fights for the judiciary. This situation the judge talked about is very unfortunate and uncalled for.’’

NAN’s findings revealed that virtually all the toilets lacked running water and can’t be used by anybody. (NAN)

Speaking to NAN, the Registrar of the Court, Mr. Geoffrey Kamyal, said: “we renovated some of the toilets. Another challenge is lack of running water.

“We are using well water at the High Court premises now.

“Just as the Judge pointed out, most time it’s the Nigeria Bar Association that fight for the Judiciary for some things to be put right in the Judiciary.

“Our challenge is that our monthly subventions hardly comes as expected, which usually hinders us from putting somethings right for the good of the people coming around the High Court, ’’ Kamyal explained.