Some residents of Abuja have raised alarm over the damage caused by flooding after the first rainfall on Friday. 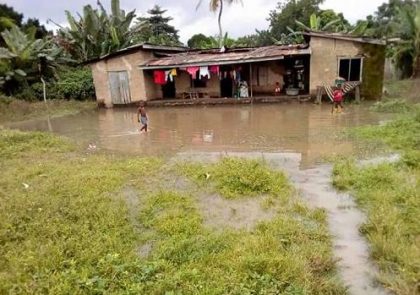 The News Agency of Nigeria (NAN) reports that after the first rainfall in Abuja, some residents of the Federal Housing (FHA) Lugbe, woke up to find their roads and homes flooded with their property floating.

A resident, Miss Chika Okeke, who narrated her ordeal, said that she had been rendered homeless.

“The rain started around 3 a.m. and before I knew, it my whole house was flooded.

“I was still mopping up the water in the bedroom only for me to enter the sitting room and the kitchen to find my property floating on water.

“My property have been destroyed now and I don’t know what to do.

“The rain caught everybody unawares and all the houses in my area were affected,’’ she added.

Also in Lugbe, other residents complained about the poor maintenance of refuse disposal system in the area thereby blocking the drainage resulting to flooding.

They called for proper waste disposal system to tackle the problem when the rainy season fully sets in.

Mrs Chioma Ejekwu, another resident said, “Everywhere you look there is waste because people throw rubbish on the roads and in the drainage.’’

“The rain water then carries the waste into the streets, blocking people’s paths and drainages.

“We have environmental workers who burn the dumping sites every two weeks which is too long because the dustbins would have already too full.’’

“Some people still to throw their waste anywhere they feel like and that is the reason we have so much waste on the road after the rains.”

Mr Joshua Ayodele, a civil servant, however called on the government to institute harsher punishment for those who do not dispose their waste properly and provide a better waste disposal system.

“If they don’t burn the waste every day, rains will continue to push it out and people will be stepping on waste as they walk.

“The government needs to provide a proper system for disposing waste in the area the way it is done in the city centre.

“Those who also dispose of waste indiscriminately should be fined or punished to act as a deterrent to others who want to do the same,’’ he added.