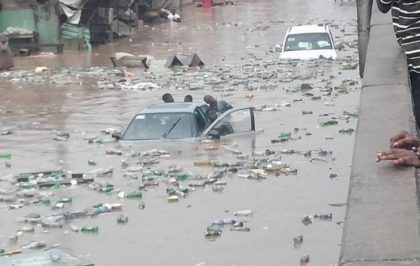 The Emir of Gumi, in Zamfara, Justice Lawal Hassan, has said that over 100 houses have been been destroyed by flood on Sunday in Gumi Local Government Area of the state.

The Emir made the disclosure on Monday in Gumi, when he led state government officials to assess the level of damages caused by the flood.

“We are pleading to the state government to come to our assistance.

“As you can see, the bridge linking Bardoki and Gayari communities with Gumi has collapsed, another one at Gwalli also collapsed, various villages are now cut off with Gumi town.

“We are pleading to government to come to our assistance, so as to save our communities as they are cut off from other towns of the state “, the emir said.

He cautioned residents against building on waterways and said government should take measures to stop the trend.

“I think government at all levels, stakeholders should focus on enlightenment campaign on communities to avoid building on waterways”, he added.

“It is very unfortunate that the flood rendered various households homeless.

“I led the state government team to Gumi to symphatise with the flood victims and assess the level of damage caused by the disaster.

“We brought over five trucks of palliative comprising assorted grains and other essential goods to be distributed to the beneficiaries especially the flood victims.

“Other beneficiaries of the gesture comprise the IDPs, Persons with Disability and other categories of the needy”, she said.

The special adviser said that the items were donated by the Federal and Zamfara govenments.

The Caretaker Chairman of Gumi Local Council, Alhaji Ibrahim Ibrahim, commended the government for the timely donation and assured judicious distribution of the items to the flood victims.(NAN)