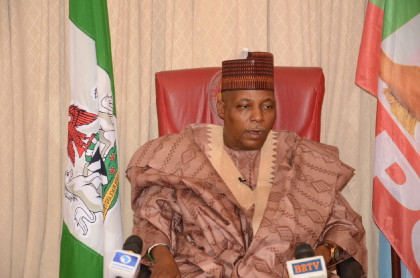 PROTOCOL
Your Excellency, Sir, if I am right, since 1979, this is the first time you are paying a courtesy call at this Government House. In your previous visits in December, 2004 to launch a power project in Damasak, donated by the Japanese Government; two campaign visits in 2003 and 2007 as well as two private visits after you left office in 2007 and another in September, 2011, you were not here for courtesy call, you went to venues of occasions. We consider ourselves honoured by this singular act of humility, more so that you are so far the first and only former Head of State and former President that has been to this Government House, from 1979 to date.

It is a rare privilege, an honour I will eternally cherish to welcome one of Nigeria’s genuine and ever green leaders, a true and bold father of the Nation, an undiluted nationalist and Pan-Africanist, His Excellency, former President of the Federal Republic of Nigeria, Chief Olusegun Mathew Okikiola Aremu Obasanjo, GCFR; the Balogun of Owu and members of his entourage, to Maiduguri, capital of Borno State.

Your Excellency, Sir, I was privileged to have worked closely with Chief Innocent Audu Ogbeh as Honourary Adviser to me on Agriculture. He selflessly assisted us in fine-tuning our Agricultural programs from 2012 to 2015 which made him to frequent Maiduguri at the heat of the Boko Haram insurgency. I remember that in one of his visits, we had one conversation in 2014 after the Chibok schoolgirls abduction. I was actually lamenting to him on governance at the Federal level with relations to poor handling of the Boko Haram insurgency. As I was lamenting to him, Chief Ogbeh said something to me and I quote; “Look, I might have had some political difference with President Olusegun Obasanjo but to say it as it is, if Obasanjo had been President while this insurgency is happening in Borno and other parts of the northeast, you would have witnessed what responsive Leadership entails”.
Chief Audu Ogbeh went further to say that from his point of view, His Excellency, Chief Olusegun Obasanjo was one of Nigeria’s most hard working President. He described President Obasanjo as a highly energized workaholic. Chief Ogbeh made these remarks as a leader in the defunct Action Congress of Nigeria at a time Baba Obasanjo was a PDP leader.

Beside Ogbeh, I had a conversation with a former Governor who told me that while he was a sitting Governor during Baba Obasanjo’s regime as President, there was a time Baba called him countless number of times in one day to get update over a crisis that erupted in the Governor’s State. Someone even told me that as President, Baba Obasanjo had phone numbers of traditional rulers and resident heads of security establishments in States that were prone to crisis and he sometimes spoke with them directly to get first hand information. Without crisis, he created time to call traditional rulers to make enquiries about communal stability, ethno-religious coexistence and community policing in order to forestall problems. In our own case, Your Excellency, after the Chibok abduction of over 200 schoolgirls in April, 2014, it took 19 days for me to receive a call from the Presidency. I brought this mainly to show the difference, because we will only appreciate scenarios when we make comparisons.

Your Excellency, Sir, you have to forgive me today for some of the things I will say. I had prepared myself to pay tribute to you in 2015, when Leadership Newspapers was honouring you as Person of the Year, in Abuja, but you were not there in person so I reserved my comments. Part of my reasons for being at that function was to meet you. This is the very first time that I am privileged to speak before you and I don’t know when next this golden opportunity will present itself. So, Sir, please allow me to say what I had been looking forward to saying. We have a responsibility to make recollections so that those of us at the helm of affairs and future leaders can learn.

If I were to author a book on President Obasanjo, I would title that book, THE COURAGE OF CONVICTION, and this is for the fact that, since my adulthood, I have not practically seen any Nigerian leader that has the courage of President Obasanjo when it comes to standing by his conviction. At some point, when governance was at its lowest ebb in this country in recent past, President Obasanjo was the lone voice that told the truth to power. He was the only elder statesman that openly stood up against the reelection of an administration that the entire world had condemned as being ineffectual, to borrow from an editorial by the Economist of London. I asked myself one question time and again, how many Leaders in Baba Obasanjo’s class, could have had the Blunt patriotism, the naked guts to openly stand against an incumbent President under the same political party the Leaders belong, to confront the endless powers of a sitting President in Nigeria who commands armed forces including those that are deployed as security aides to former Presidents? The more I asked myself, who could have had such guts, the more I said to myself that only President Obasanjo could have done what he did? I don’t know if all Nigerians understood the extent of risk His Excellency took which only Courage and Conviction could have inspired. It is not a child’s play to confront a sitting President’s reelection bid in Nigeria. Has anyone asked himself, what would have happened with relation to Baba Obasanjo if the then incumbent President had been reelected? The mockery alone would have been more than enough to frustrate anybody. Some senior citizens kept mute for fear of the unknown should the President win reelection and this is why they restrained themselves from speaking against a regime that had grossly failed Nigerians especially on the area of national security which has been our major area of concern in dealing with the Boko Haram.

At some point, Baba Obasanjo was the loudest voice speaking against poor handling of the security situation in Borno and rest of the northeast. He regularly spoke in our interest at different times within and outside Nigeria. I recall that Baba Obasanjo was the first leader to have made a bold effort towards peaceful resolution of the Boko Haram crisis. When others saw Maiduguri as a no-go-area, President Obasanjo risked his safety and flew into Maiduguri in September, 2011 and drove to a daring location to interface with the inlaws of late Mohammed Yusuf so that he could establish a channel of negotiation to nip the insurgency in the bud before it later grew out of hand.

Your Excellency, Sir, for us in Borno State, you occupy a special place in our hearts and minds. You did the best you could to save us from mass murder. I am aware that you had met with then President on many occasions over the situation in Borno. You passionately wanted to prevent the high scale deaths and destructions that were to later become of us. We appreciate your sincere efforts.
Borno has seen hell, Your Excellency.

Tens of thousands of our innocent citizens were brutally killed; married and single women were abducted and raped; our sons were forced into becoming child-soldiers; more than two million citizens were internally displaced in camps and host communities in Maiduguri alone. Others fled to different parts of Nigeria including Lagos, some fled to neighbouring countries of Niger, Chad and Cameroon. Recently, we carried out a Post conflict assessment in accordance with international best practices that are verifiable through satellite images and physical analysis and based on our assessment,

*About one million private houses were destroyed by insurgents across the 27 local government areas in the State.
* 5,335 classrooms and other school buildings were destroyed in primary, secondary schools and two tertiary institutions.
* A total of 512 primary schools, 38 secondary schools as well as two tertiary institutions: Umar Ibn Elkanemi College of Education, Science and Technology in Bama and College of Business and Management Studies in Konduga were affected.

*A total of 1,630 water sources that include Motorized Boreholes, hand pumps, solar powered boreholes and facilities for piped water schemes were destroyed by the Boko Haram insurgents.
* 665 Municipal buildings comprising Ministry and LGA buildings, prisons, police Stations and electric offices were destroyed.
*Also, 726 power distribution substations of 11 KV/415V and distribution lines of 415-230 V were destroyed across the 27 local government areas of the State and so were destructions of our Eco systems that include parks, game Reserves, Forest reserves, Grazing reserves, green wall projects, orchards, ponds, river basins and lakes, some of which were either poisoned or bombed in 16 out of 27 local government areas.
*These are in addition to other monumental economic looses suffered by millions of citizens as well as huge quantum of funds expended by Government on complimentary services to the military, rebuilding communities initially destroyed before they were occupied as well as rehabilitating victims because we figured out that we had to be paying some sort of compensation to victims so that they do not join Boko Haram out of frustration.

Your Excellency, there is light at the end of the tunnel. You have fought for change and change we have got. The fight against Boko Haram has largely been result driven under the Buhari Administration and we are most hopeful that the end of Boko Haram is closer than it ever was. We have began reconstruction works as a short documentary clip I am respectfully handing over to you, would confirm. We started reconstruction works to demonstrate commitment on our part. We are optimistic, that we will be supported by the Federal Government soon.

Your Excellency, I will be unfair if I don’t pay special tribute to our security agencies for their patriotism and sacrifices. You have done what they are doing. You fought the Civil War at the front line to defend the unity of Nigeria and I can tell you, Your Excellency, Sir, that from the north to the south, Nigerians unanimously associate you with one highly unique attribute which is, that no matter the circumstance, President Obasanjo does not, cannot and will never compromise the unity, the oneness and indivisibility of the Federal Republic of Nigeria. If not for your wisdom, your nationalism and the Nigerianness in you, this country would have been divided along religious lines between 2001 and 2003 when hate brewed from the north to the south over our diversity of faith. Someone else would probably have thought of exploiting the sentiments and division to make political gains ahead of the 2003 reelection but not President Obasanjo.

Your Excellency, Sir, majority of Nigerians salute you; we adore and respect you and we shall forever be grateful to you for standing for the unity, continued existence and the recovery of Nigeria when Nigerians needed you most.

We pray that God continue to keep you for us in good health and strength. May you remain the true elder statesman that you have always been who stands for what is right and what is good for a better Nigeria that all Nigerians seek and deserve.
May God bless our country and grant us peace and progress!

Thank you Your Excellency.