This was in acknowledgement of their selfless and outstanding role in the peaceful conduct and conclusion of the  2015 general election. 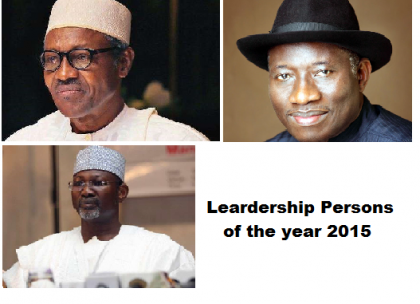 The awards which was organized by The Leadership Newspaper group, stands to recognize personalities who have played outstanding roles in entrenching and improving Nigeria’s democracy, especially for their role in the 2015 elections.

In his address, Sam Nda-Isaiah of The Leadership Newspaper Group, commended the awardees for standing for the nation at a time when mischief makers choose to declare war on the cooperate existence of Nigeria.

“Jonathan lost election and won at the same time by doing what no other president in the history of Nigeria has done.” he said

While president Buhari was be honoured for making history as the first opposition candidate to defeat a sitting president after three attempts, Jonathan was being recognised for achieving the improbable and for conceding defeat in an election in which he was a contestant – a first for Nigeria, and the former INEC boss, Jega was honored for his courage, doggedness and fairness even in the face of threats to his life in the conduct of the 2015 elections, a feat he achieved to global acclaim.

Others honoured at the annual award are speaker of the House of Representatives, Yakubu Dogara and Gombe State governor, Ibrahim Hassan Dankwambo, as LEADERSHIP Politician and Governor of the Year respectively.