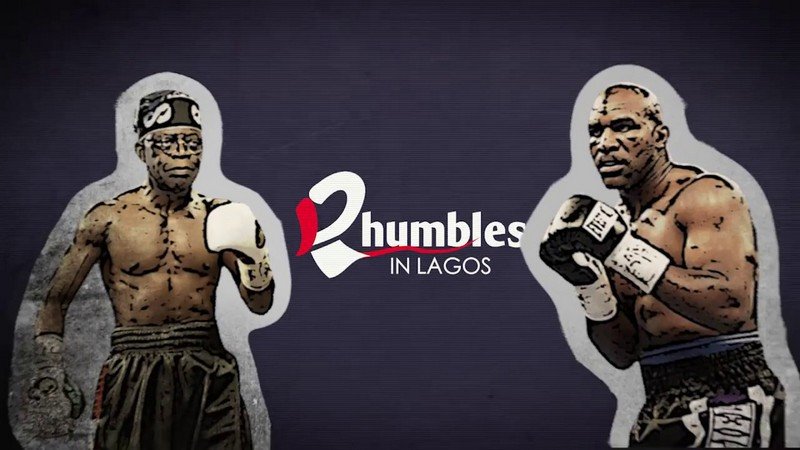 Tinubu: hopes to knock down Holyfield … It will be refereed by Nobel Laureate, Prof. Wole Soyinka.

According to a statement by Foluke Michael, the Project Manager of the fight tagged “Rumbles in Lagos’’, the match will hold on 25 May at the Eko Atlantic City and will be beamed live to the world. Holyfield is 54, while Tinubu is 65.

Tinubu: hopes to knock down Holyfield. The charity event is the first of its kind on the African continent, she said.

It will be referred by Nobel Laureate, Prof. Wole Soyinka.

Tinubu in his endorsement of the BAT vs Holyfield bout, said: “I can’t wait to knock Evander down. I’m the real champion of the world!’’

The private sector-initiated event is designed as a contribution to the 50thanniversary celebration of the creation of Lagos State under the ongoing project, Lagos @50, chaired by Soyinka.

“Significantly, it is aimed at bringing world attention to some health-related issues in Africa and will focus on cases such as Autism in Children, Breast Cancer, Mental Illness and HIV/AIDS and River Blindness.

Foluke said it will also especially focus on the plight of Africans living with Disabilities among others,’’ it said.

The event will donate five 40ft. containers of medical and relief materials worth over $2 million dollars to Lagos State Government and other neighbouring states, she said.

Part of the proceeds from the event would benefit not-for-profit organisations and agencies in Lagos which cater to and was engaged in research programmes aimed at eradicating these medical conditions.

The “Real Deal’’ Evander Holyfield was billed to arrive in Lagos in May, and he would engage children and youths in the course of his visit.