The 82 rescued Chibok school girls have been reunited with their parents on Saturday in Abuja in an emotion-laden occasion.

Mr Joe Mutah, the Chief Press Secretary to the Minister of Information and Culture, Alhaji Lai Mohammed, disclosed this in a statement in Abuja.

Mutah said that the girls were earlier reunited with 24 others, who were rescued by the Federal Government last year. 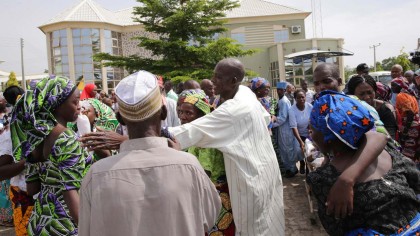 He said the Minister of Women Affairs, Hajiya Jummai Alhassan, disclosed at the event that a group of experts had been put together to address the girls’ psycho-social support and medical needs.

Mutah said that the Minister was represented by Mrs Abidemi Aremo, the Director Planning, Research and Statistics in the Ministry.

He quoted the Minister as saying: “the children are being rehabilitated and we believe that in due course they will be properly aligned with their families.

“Intensive medical attention is being administered and as soon as they are done, they will be enrolled into a remedial programme’’.

Alhasan also disclosed that the 24 others who were rescued last year were undergoing psycho-social counselling and remedial programmes preparatory to their enrolment in school next academic session.

“For the 21 and three that were earlier released, I wish to inform us that their psycho-social counselling is still in progress and of course they have started remedial classes.

“They are being taught five subjects, which is designed with a view to getting them back to school come the next school session, which is in September this year.

“They will be settled in various schools and I am sure they will continue their education from there,’’ she said.

The Minister reassured of the Federal Government’s commitment to intensifying efforts to rescue the remaining girls in captivity and expressed appreciation to all those involved in the rescue mission.

The Chairman of the parents of the abducted school girls, Yakubu Nkeki said their joy had no bounds and thanked President Muhammadu Buhari for wiping away their tears.