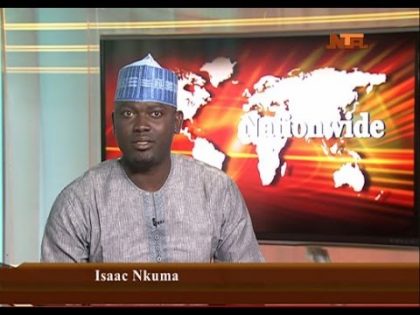 Not many will pass by without a second look at this impressive, amiable, ebony black and handsome young man with a smile that can turn a rock to butter with hot knife, and wait a little, his humility is a gift from the gods, like the fabled prince of yore, he is the prince of the tube.

But these qualities contrast the famed barrack boy, who undaunted by his background has risen to face the challenges of life especially in his chosen profession – broadcasting where he has been placed on the table with great men and he has shaken hands with the lords of the profession.

He is an epitome of hardwork and as the saying goes “Hardwork Pays”. Isaac Nkuma has bagged the best staff award for the month of August, 2017. The award Committee found him outstanding in his daily delivery on assigned duties. We cornered him after the award and he shares his thoughts with us.

Contact: Congratulations on your award of best staff for the month of August, 2017 and you are the winner of the maiden edition, how does this make you feel?

Isaac- I feel very elated and for me it’s a spur to do more and its particularly more exciting that I am the first beneficiary under the leadership of the present Director General, Yakubu Ibn Mohammed.

Contact: Did it ever occur to you that you will be the recipient of an award?

Isaac: It never crossed my mind, I have just been doing my job and over time, we in the junior cadre have always wanted some kind of appreciation, especially when we know that our bosses come down hard on us when we do something wrong. But it never crossed my mind that a day like this will come for me because as far as I was concerned I was just doing my job. I was really shocked when I was called in to receive the award, it was a privilege and nothing could be more inspiring than having to shake the hands of the DG and his management team with a standing ovation to booth, this I must say is the peak of my career and I pray to God I will be able to sustain it.

Contact: Give us a little background to Isaac Nkuma to help us know what prepared you for the role you are playing in NTA and possibly the award?

Isaac: My sojourn in NTA has been an interesting one. I never set out to be a broadcaster, I was born in the barracks to a soldier father so most likely my career was to be a military man. However, when I finished secondary school, my father was afraid that the barracks was beginning to influence me so he shipped me to Lagos to be with my elder sister and there I came in contact with a man I never knew from Adam, Bashir Maidogo from Borno State and he gave me a job as Utility Assistant. I was quite young, but he gave me a chance and that is how the journey began in 1996.

Then Ben Murray Bruce came and gave me the opportunity to go to TV College in Jos, FRCN training School in Lagos then got converted to News Assistant and later got a University degree and that is the story for me.

Contact: Do you think its hardwork that gave you the award or you were just favoured?

Isaac: Though I believe hardwork pays, but I am sure I was favoured by God because even with hardwork if God doesn’t give you the wisdom to carry out your duties diligently, then you wont be noticed or recognized, also the confidence of my bosses that when they give me a job that I wont fail them, so it’s a combination of both- hardwork and God’s favour.

Contact: What would you say of this award, do you think it’s a step in the right direction with regards to staff motivation and productivity?

Isaac: Definitely, it’s the right step in the right direction; you will be surprised at what this award will do to the psyche of staff nationwide, because now they are aware that something is in place as a moral booster and recognition for hardwork. Im sure this will lead to more dedication and greater productivity.

Isaac: To my colleagues, the time has come now, we have been recognized, so there is need to put in our best. And to my fans, I appreciate you all for you are the reason why we are still in business and also believe in yourself irrespective of your situation or background and to management I pray that they sustain this award for the staff.